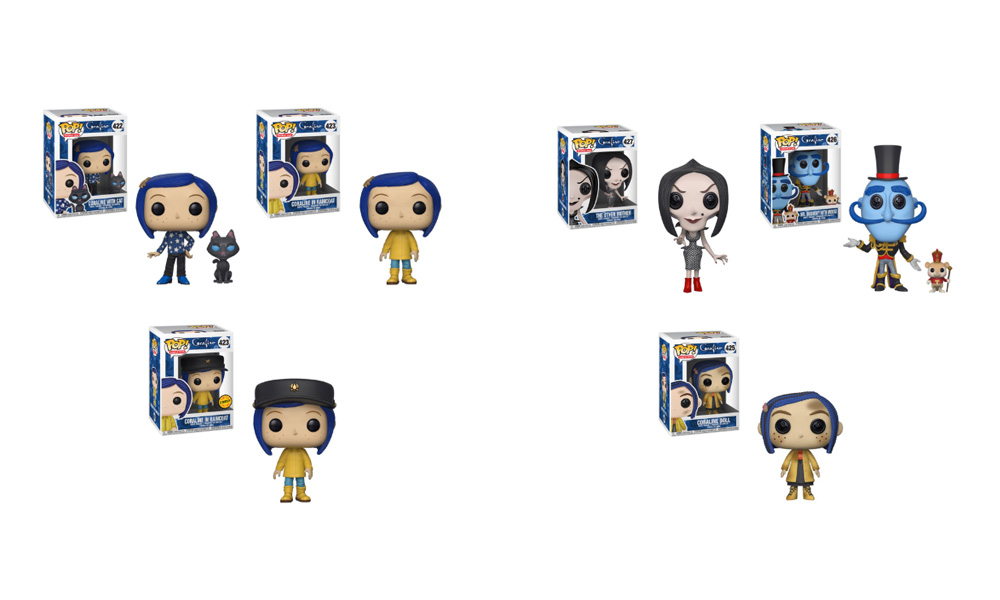 As the 10th anniversary year draws near for Henry Selick’s Coraline — adapted from Neil Gaiman’s children’s book and marking the feature film debut of stop-motion powerhouse LAIKA — fans can expect a resurgence of licensed goods to help celebrate. Just announced by collectible toys giant Funko is a dedicated Coraline line of its Pop! Movies vinyl figures coming out in September.

“Welcome to the Other World, a magnificent place infinitely more exciting, and dangerous, than reality. If you’re going to travel there you’ll need a guide, or several. Fortunately, a handful of Coraline Pop! figures are up for any adventure.”

The line is anchored by three variants on the young heroine: Coraline in her indoor duds with the Black Cat, in her yellow rain gear, and a “Chase” variant with raincoat and cap. Those of a more wicked nature will be drawn to Other Mother, while the whimsical fan might opt for blue-hued circus master Mr. Bobinsky (and his trained mouse). There will also be a doll version of Coraline with button eyes and yarn for hair.

Starring Dakota Fanning, Teri Hatcher and John Hodgman, Coraline centers on a curious young girl whose family moves to an odd old house shared with a variety of strange tenants. Feeling bored and neglected by her busy parents, she discovers a secret passage to an Other World where everyone she knows is replaced by doubles with buttons for eyes. But the fun she finds there is merely a lure into a sinister web. The voice cast also featured Jennifer Saunders, Dawn French, Keith David, Ian McShane and Robert Bailey, Jr.

Coraline was nominated for the Best Animated Feature Oscar, Golden Globe and BAFTA Award. It won the BAFTA Children’s Award for Best Feature Film and three Annie Awards, among others.