Get ready for Shrek’s Swamp Boat, Puss in Boots’ Purrrfect Ride and the Madagascar Soaking Safari Surprise? (Yes, we made those names up!) DreamWorks Animation is moving ahead with plans to open a theme park attraction in East Rutherford, New Jersey. On Wednesday, DreamWorks Animation SKG and Triple Five, the Alberta, Canada-based developer that operates the giant Mall of America in Minnesota, announced plans for a theme park in the New Jersey Meadowlands not far from Met Stadium.

The indoor theme park, about 10 miles west of New York City, would feature rides, attractions and a glass-enclosed wave pool incorporating characters from the studio’s films. DreamWorks Animation CEO Jeffrey Katzenberg confirmed the deal in a statement, in the New York Times. This would be the first wholly themed DreamWorks park.

The Jets and Giants sued to block construction last month, saying it threatens to clog the already-congested area on game days at MetLife Stadium. Developer Triple Five said it hoped to open the park in 2014 but it’s unlikely it will happen in time for the Super Bowl being held at MetLife Stadium.

“American Dream at Meadowlands is poised to become a one-of-a-kind retail and entertainment destination in North America. We look forward to working with Triple Five Worldwide to incorporate DreamWorks Animation characters, storytelling and technology into a unique and innovative family entertainment experience at the venue,” Katzenberg said in a statement. 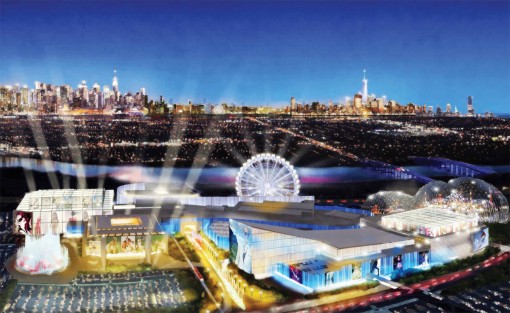