The deal between Ilyas & Mustafa Galadari Group (IMG) and Cartoon Network is bringing the fan favorite characters of award-winning hit animated series Ben 10, Adventure Time, The Powerpuff Girls and The Amazing World of Gumball to life in an interactive world of rides and entertainment.

Ben 10 5D – “Hero Time” will immerse audiences in the midst of a real-life battle with Ben and Rook in an epic 5D multi-sensory theatre experience. Fans can ride with Blossom, Bubbles & Buttercup in The Powerpuff Girls – Mojo Jojo’s Robot Rampage to help fight Mojo Jojo’s evil robot creation. The Ride of Ooo with Finn and Jake is an Adventure Time themed scenic ride high above the park, and The Amazing Ride of Gumball is an interactive remote game in which fans can enjoy zapping objects that are threatening to take over the town of Elmore.

In addition to rides and attractions, the Cartoon Network Zone will have an exciting line up of branded restaurants and retail locations, including the world’s largest Ben 10 retail store.

IMG Worlds of Adventure’s 1.5 million square foot project will be the world’s largest temperature controlled indoor themed entertainment destination with a capacity to admit more than 30,000 guests every day. 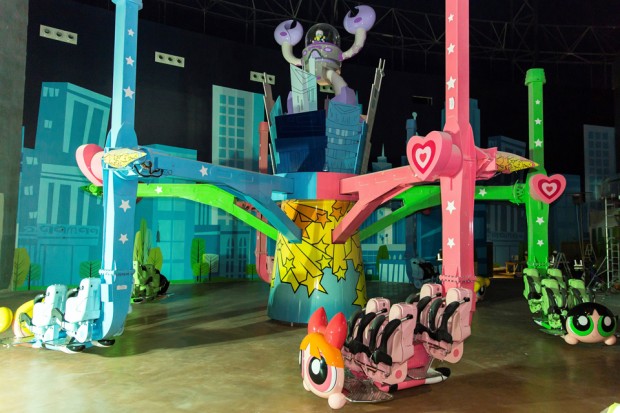