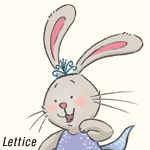 Wales-based media company Calon has licensed from HarperCollins the rights to develop an animated series based on Mandy Stanley’s series of best-selling children’s books.

The TV series will focus on a rabbit named Lettice, star of the million-selling book series.

The deal was facilitated by Merchantwise, an Australian branding and licensing agency that will represent the TV series for licensing and merchandising.

“Lettice is the perfect subject for an animated series for pre-school children,” said Robin Lyons, Calon’s managing director. “Mandy’s illustrations are totally captivating, and lend themselves perfectly to 2D animation. Charming as she is, Lettice is never soppy. She’s a strong character who makes things happen, who achieves her dreams against all the odds. It’s no wonder children like the books, and I’m sure they’d like to see her on television.”

Calon’s creative team, responsible for international successes such as Hilltop Hospital, Hana’s Helpline and Igam Ogam, is working closely with Stanley to ensure that the charm and appeal of the books is maintained.

Calon has already started to show its initial proposals for a 52 x 10 min. series to broadcasters in the U.K. and Europe.

You may also like...
Related Topics:Calon, HarperCollins, Mandy Stanley