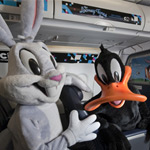 In conjunction with the premiere of the new Looney Tunes Show on Cartoon Network on Tuesday at 8 p.m. (May 3), the cabler has kicked off a new advertising campaign in conjunction with Spirit Airlines. CN has developed special custom graphics with production media company Global OnBoard Partners transforming the interior of the entire fleet of Spirit planes into an immersive experience featuring Bugs Bunny, Daffy Duck, Porky Pig, and other beloved Looney Tunes characters.

According to the press release, traditional advertising provides consumer recall of only 5-12%, while the Looney Tunes experience provides recall rates of up to 94%, proving passengers remember the brand and message after they have exited the aircraft.

The Looney Tunes interior wraps appear on the overhead bins, skyline panels above the windows, bulkhead walls, and tray tables of three of Spirit’s Airbus A320 aircraft from April 30 till June 30, 2011. Other Spirit aircraft, including its fleet of Airbus A319s and A321s, will feature Looney Tunes characters on tray tables until early June 2011.

Global Onboard Partners, Spirit, and Cartoon Network will also be hosting a Gatehouse Ambassador Program in the Fort Lauderdale-Hollywood International Airport May 14, 15, 16.  Two Cartoon Network ambassadors and Looney Tunes costumed characters will be placed in the gatehouse area in Ft. Lauderdale reaching all families and children.  Fans will be treated to giveaways such as tattoos and bunny ears.

Go behind the scenes of this new production here: