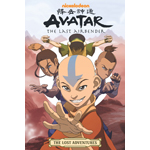 The popular Nickelodeon animated series Avatar: The Last Airbender is coming back to comics via Dark Horse.

The Oregon-based publisher announced a multi-part publishing program that will kick off with an Avatar entry in the annual Free Comic Book Day, set this year for May 7. The free comic will feature two short stories, including an unpublished tale called Relics, in a flipbook format also featuring Star Wars: The Clone Wars.

That will be followed with the July 13 release of Avatar: The Last Airbender — The Lost Adventures, an all-new 240-page comic book contains over 70 pages of never-before-seen material in addition to long-out-of-print comics previously published in Nickelodeon Magazine.

Additionally, Dark Horse will create new Airbender stories that will be published as digest-style original graphic novels in early 2012. Picking up where the season three finale left off, this new series will follow the further adventures of Aang and his friends, as they help to rebuild a world torn apart by 100 years of war.

“We had a great experience collaborating with Dark Horse on Avatar: The Last Airbender — The Art of the Animated Series,” said series co-creator Michael Dante DiMartino. “We are excited to work closely with them once again to bring the further adventures of Avatar Aang and his friends to the comic world.”