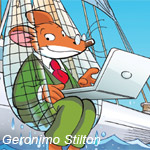 Animation star Geronimo Stilton will continue to be the face of public service campaign to teach children in Italy to use the internet safely, under a new deal between Atlantyca Entertainment and Telecom Italia.

The campaign, called Navigare Sicuri, will use the character through 2012 under the deal, which was announced by Claudio Mazzucco, CEO of Atlantyca.

Navigare Sicuri is a safe-surfing initiative started in 2009 by Telecom Italia in collaboration with Save the Children and Fondazione Movimento Bambino with the participation of Atlantyca Entertainment. Its goal is to raise the awareness of safety procedures for children, teenagers and parents who use the internet.

In addition to the book, posters featuring Geronimo Stilton and his “10 Rules” are being given out at elementary schools as part of a national tour that brings the campaign to a number of Italy’s major metropolitan areas. Geronimo Stilton is also prominently featured on Telecom Italia’s website, with his own webpage where he shows children how to use the Internet correctly and explains to parents how they can keep their children safe.