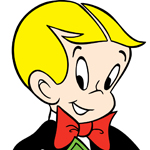 A pair of classic characters are getting a new life in comic books, with Ape Entertainment acquiring rights to create new stories for Richie Rich and Strawberry Shortcake.

The publisher announced at the just-concluded New York Comic-Con its plans for the characters, which include a modern revamp for the poor little rich boy.

When the new Richie Rich comics arrive from Ape’s Kizoic imprint next year, the series will see the character as an altruistic adventure who travels the world with his friends and uses his huge bank account to help out the less fortunate.

“While there will be plenty of adventure, there will also be plenty of fun,” says Ape Entertainment founder and co-publisher Brent E. Erwin. “Ape is by no means reinventing the wheel, just adding another spoke. And in the words of Richie Rich, you can take that to the bank!”

The Strawberry Shortcake comics also will publish under Ape’s child-friendly Kizoic imprint and also will arrive in stores in early 2011 with exclusive scratch-and-sniff covers.

“The great thing about Strawberry Shortcake is that it crosses generations and brings parents and kids together,” says Ape founder and co-publisher David Hedgecock. “Unlike a lot of comics found on the shelves today, this is a property that the entire family can enjoy. It’s both nostalgic and new, all at the same time.”

The company acquired the license to Richie Rich from Classic Media, and to Strawberry Shortcake from American Greetings Corp.

Richie Rich first appeared in the pages of Harvey Comics in 1952, earning his own series by 1960 and becoming a smash hit for the next several decades. Harvey stopped publishing comics in the mid-1990s and sold the rights to its comics characters to Classic Media.