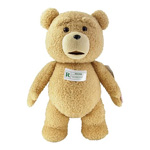 Yes, it’s that time of the year when we begin to feel that gnawing sense of panic, reminding us that the holidays will be with us in less than a couple of months. If you’re looking for a few solid gift ideas for that talented animator or toon fan in your life, you have arrived at the right place. We’ve searched high and low to find a few special items that will hopefully seal your status as a thoughtful friend or relative during this stressful time of the year. Let’s just hope they don’t return the favor with a brick-hard fruitcake or a copy of the new Olivia Newton John and John Travolta Christmas CD! 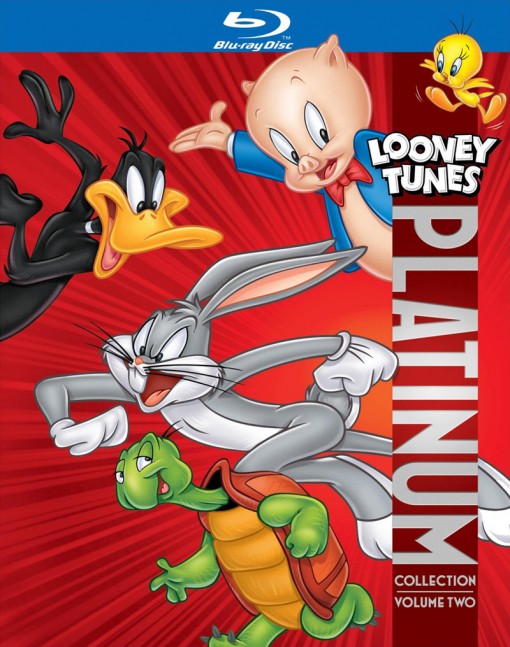 We don’t know a single animation fan who wouldn’t want to to spend at least part of their holidays with Bugs, Daffy, Porky, Tweety and the rest of the hilarious Looney Tunes gang. That’s why the new Platinum Collection from Warner Bros. Home Ent. is such a perfect gift. Featuring 50 digitally remastered shorts by Bob Clampett, Chuck Jones, Tex Avery, Robert McKimson and Friz Freleng, this hot new release is available both on DVD ($26.99) and Blu-ray ($44.98) and includes a cool cartoon guide with rare images compiled by none other than animation historian Jerry Beck. The first disc showcases core characters (i.e. Bugs, Tweety, Daffy, etc.), while the second one zeroes in on one-shot classics like Cecil Turtle, Beaky Buzzard and A. Flea. The package also includes three Oscar-nominated shorts A Wild Hare, Tabasco Road and Mexicali Shmoes. Die-hard fans will especially love the third disc (only available on the Blu-ray version), which is packed with special featurettes, expert commentaries and alternative audio tracks, as well as excellent docs about Freleng and Avery. We could easily skip all the holiday releases and stay home and watch these timeless toons over and over again! 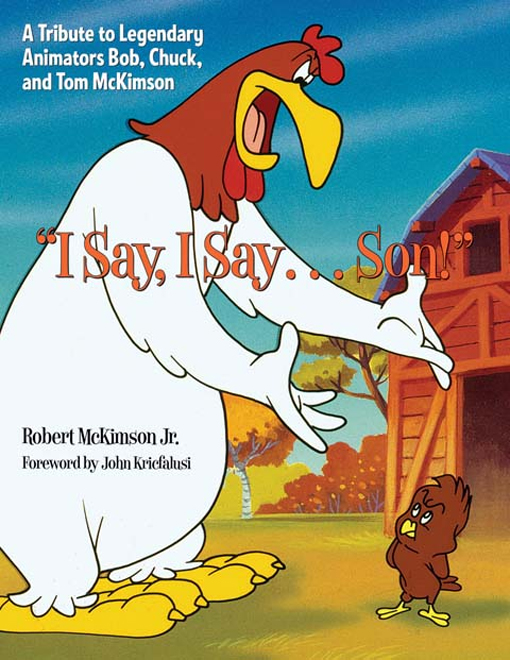 I Say, I Say…Son! A Tribute to Legendary Animators
Bob, Chuck and Tom McKimson

The McKimson brothers have played such a big role in the history of animation that it’s hard to believe that this is the first book on their life and accomplishments. Penned by Robert, the son of Bob McKimson, who created such influential characters as Foghorn Leghorn, the Tasmanian Devil, Speedy Gonzalez and Sylvester Jr., this loving work looks at the life and times of these three talented men and chronicles their work on the Looney Tunes, Pink Panther and the Mr. Magoo series. McKimson generously shares tidbits about his relatives (“I can remember seeing my father do a fast drawing and never retrace a line…He had a habit of sharpening his pencil, not with a sharpener, but with a piece of paper attached to the side of his lighted animation board.”), as well as making insightful observations about the classic Looney Tunes characters and figures such as Leon Schlesinger, Chuck Jones and Tex Avery. Fans will also love the beautiful, color reproductions of book covers, original cels and layout drawings, which are fun to thumb through and return to for inspiration over and over again. There’s something genuinely loving about this collection, which even includes a copy of a typewritten 1946 letter from the Academy welcoming Bob McKimson into the Short Subjects Branch. 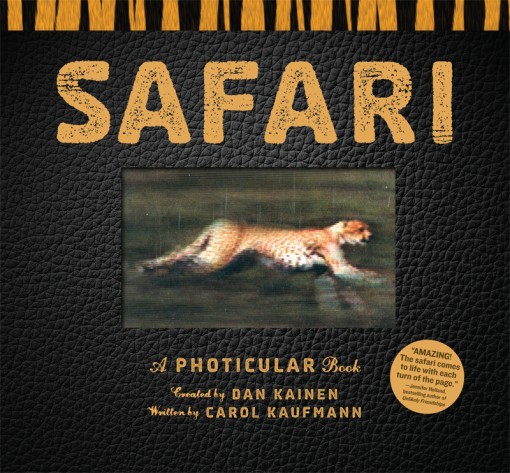 Some people like more movement in their books—that’s why this intriguing new release featuring Scanimation technology is a great gift for those who like a little more visual magic in their tomes! Using lenticular-based technology, sliding lenses and video imagery, the animals featured in this book move like a little 3-D movies across the page. Seriously, it feels like a cool little National Geographic mini-short on every page. Yes, the publishers have included a nice journal about a Kenyan safari and at-a-glance list of cool facts about the animals as well, but who can concentrate on reading when there’s a bounding cheetah, an ear-flapping elephant or a galloping gazelle staring back at you. This, ladies and gentlemen, is the very cool, 3-D version of the flipbook—and it’s much easier to afford than a Kindle! 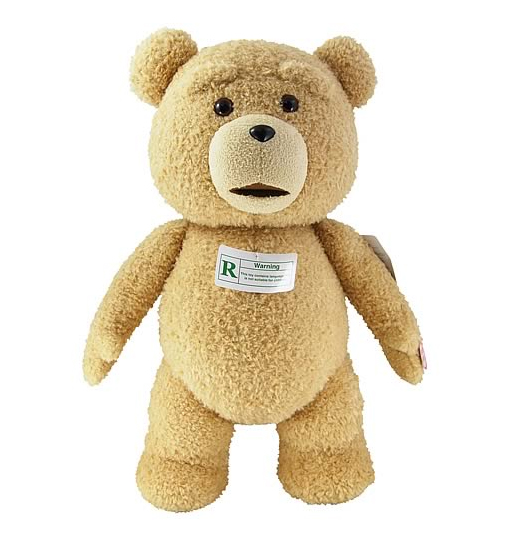 Seth MacFarlane’s R-rated live-action comedy Ted was one of the biggest comedy hits of the summer. Now, you can also put a 16-inch version of the foul-mouthed Teddy Bear star of the movie under your Christmas tree! Although the little guy looks very innocent, he has a pretty raunchy vocabulary. We’re not sure if grandma will approve of the little guy saying things like, “You ever hear a Boston girl have an orgasm?” but you got to admit: He is so much fun to have around the house or have a beer or two with. Just ask his co-star, Mark Wahlberg! If you’re shopping for younger, more innocent minds, then you should consider the eight-inch-tall Ted plush who only says G-rated things like “I wuv you” and “C’mon, I don’t sound that much like Peter Griffin.” (Available on www.entertainmentearth.com.) 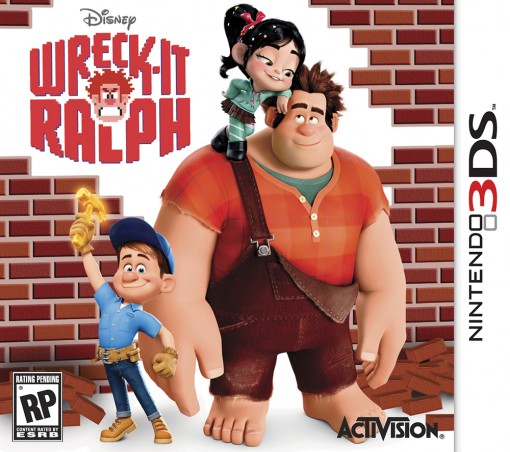 Disney Consumer is unleashing a Claw Machine-worthy assemblage of goodies for the studio’s holiday release Wreck-It Ralph. Topping the list for gamer fans is Activision’s Nintendo-exclusive videogame. (Does it get more meta than a videogame based on a movie based on videogames?) In this side-scrolling story extension, Ralph teams up with Fix-It Felix to stop a creepy invasion of Cy-Bugs. The game is rated E and available on Nintendo’s Wii, DS and 3DS platforms. For the less manually dexterous, we are loving the animated talking Ralph and Vanellope action figures ($44.99 each) for kids four and up, and the deliciously adorable scented 9” plush toys modeled on the kart-racing kids of Vanellope’s Sugar Rush game world ($8.99) for younger tykes—or any toon fan with a serious sweet tooth. 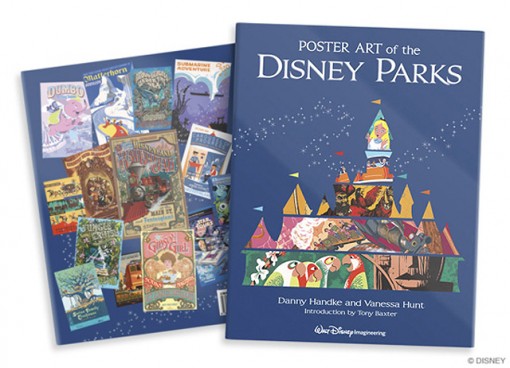 Poster Art of the Disney Parks

As any visitor to Southern California’s Disneyland theme park (or any of the myriad Mouse House attractions scattered around the globe) can attest, there’s nothing quite like the sense of magic evoked by the detail-focused, full sensory experience crafted by the Disney Imagineers. While it’s impossible to bottle the feeling of being at The Happiest Place on Earth, this holiday season you can gift someone special this collection of beautiful poster art from Disney Parks, which for decades have been charged with succinctly, artistically communicating the spirit of each attraction—whether the adventure that awaits on the Jungle Cruise or the magical allure of Peter Pan’s Flight. Compiling posters from 1956—when Disneyland first displayed them—to 2012, the book explores the evolution of art styles, design techniques and the characters of the park attractions themselves. Posters from Disneyland Tokyo, Paris and Hong Kong help fill out the story of this unique artistic tradition, which comprises 144 lushly colored pages in this 14 x 10.9” hardcover treasure. 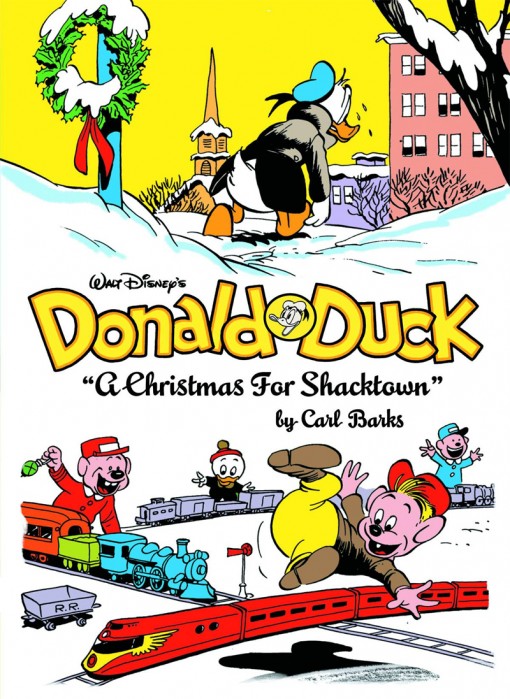 Fantagraphics, that endless cornucopia of printed delights, has a couple must-nab offerings for gift givers with fans of old school Disney comics this year. You’d have to be a total Scrooge McDuck to not love the seasonally appropriate Walt Disney’s Donald Duck: A Christmas for Shacktown ($28.99). This third volume of the reprinting of Carl Barks’s classic Donald and Scrooge adventure (originally published in 1951) showcases the legendary artist’s peak with his Dickensian portrayal of the Duck family’s venture to raise money to throw a Christmas party for the poor children of Duckburg’s slums. The painstakingly re-colored collection also includes Donald adventures “The Golden Helmet” and “The Gilded Man”—and all that’s less than half of this 240-page volume! 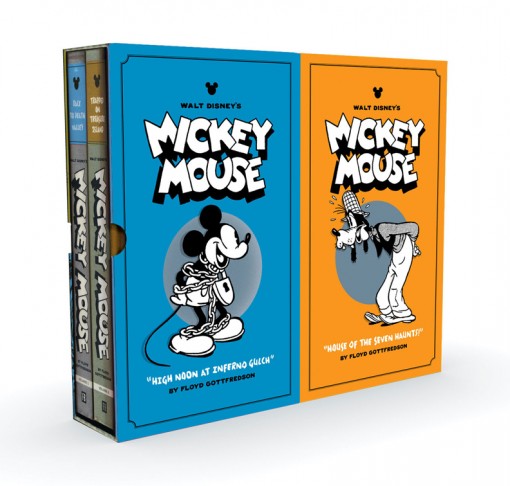 Travel further back into the classics with the beautifully printed and packaged Walt Disney’s Mickey Mouse, Vol. 3 & 4 box set ($49.99), which feature’s Mickey and friends’ 1930s adventures as told by legendary artist and writer Floyd Gottfredson. Volume 3 highlights the Wild West comedy adventure High Noon at Inferno Gulch, plus over 50 pages of supplementary features—behind-the-scenes art, vintage publicity material, commentary form Disney scholars, and more—while Vol. 4 gets spooky with House of the Seven Haunts and another ghoulish assortment of terrifyingly terrific extras. The largely black-and-white reprint collection (with some color) comes as two large hardbound books in an attractive blue and gold slipcase. 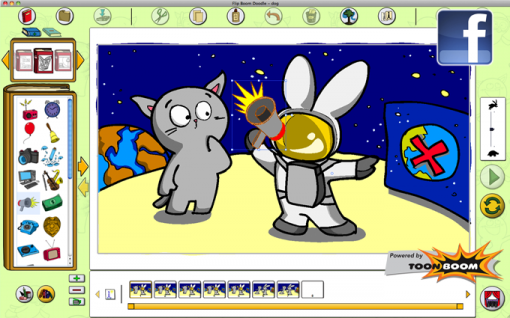 Software house Toon Boom is well known in the industry for its professional products, but if there’s a budding young animator in your life, they also offer a range of affordable and easy-to-use programs to help toonsters of all ages and skill levels hone their talents from the comfort of home. For teen and adult hobbyists getting started, Toon Boom Studio ($199) is a multi-technique facilitation system loaded with effects and the cool Robo-Skeleton character animator to quickly get your ideas moving. The Flip Boom line offers tools for a range of age groups and skill levels with a super simple interface to import drawings, photos and more plus a sound effects library—plus users can export their projects directly to YouTube and Facebook. Toon Boom recommends FB Doodle ($29) for kids who want to create quickly, FB Cartoon for kids 6-12 ($39.99) and All-Star for teens and up ($59). We also love Animation-ish, created by kids’ author/illustrator Peter H. Reynolds and guided by his storytelling and toon tips ($59.99) and comics creator Garfield’s Comic Boom, created and shepherded by Garfield creator Jim Davis ($29) for dedicated doodlers of all ages. 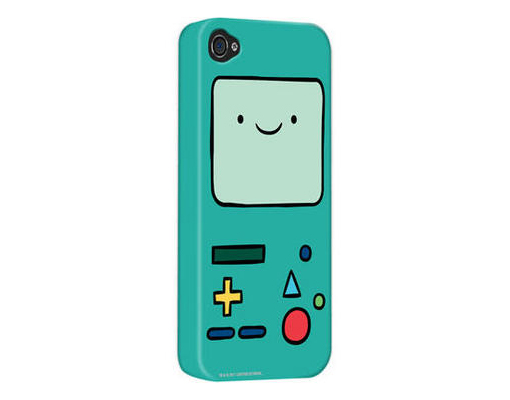 If you haven’t scoped the online Cartoon Network Shop recently, you may have forgotten what a dizzying array of cool merch is waiting to mesmerize you and max-out your credit card. Shield your eyes and type these majorly mathematical items into your search bar, lest ye become mired in the swamp of goodies! First things first: We adore Penn Ward’s Adventure Time, and so does just about everyone as far as we can tell. For the grownup who’s a kid at heart on your list, splurge on the adorable Beemo Face iPhone Case ($34.95, for iPhone 4/4S). Sassy teens will love the LPS “Lump Off!” tee (adult sizes, $24.95), and school aged tykes will be the envy of the play yard with the Reversible Jake & Finn Backpack ($44.95)—or just kit out the whole family in matching Jake Face tees (men’s and women’s sizes $24.99, kids 15.95) and call it a holiday. 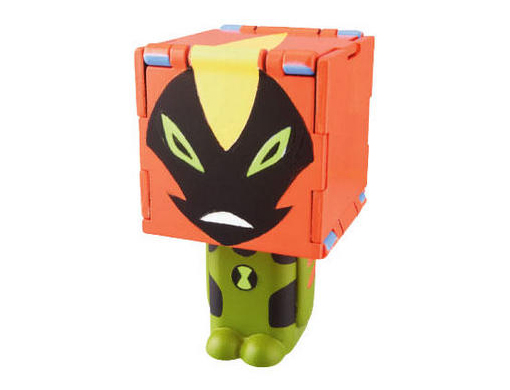 For fans of J.G. Quintel’s Regular Show, what could be better than a Mordecai & Rigby laden gift basket? Say it all with an assortment of “Oooh!” catch-phrase emblazoned merch including shirts (men’s and women’s $24.95, kids $15.95), aluminum water bottle ($19.95) or super professional iPhone 4/4S case ($34.95). We also love the minimalist, transformable Ben 10: Ultimate Alien “AlterAlien” figures, which are interactive enough to keep kids busy and cool-looking enough to grace any fan’s cubicle or drawing board with style—and at just $11 a pop you can jump-start your giftee’s collection (top picks: Swampfire, Spidermonkey and Echo). 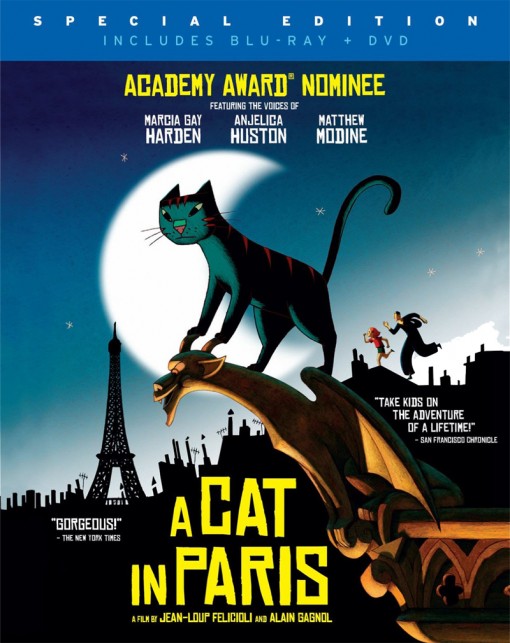 A Cat in Paris DVD

The Pirates! Band of Misfits
Directed by Peter Lord
Sony, $30.99 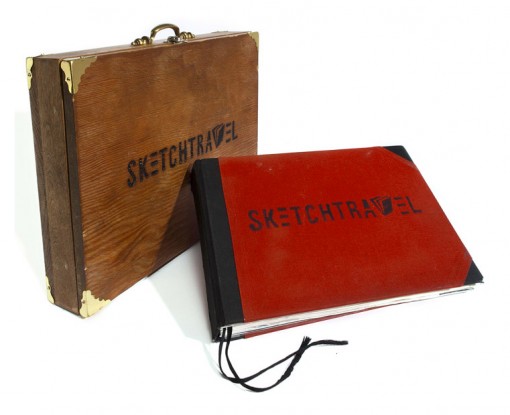 The Art of Wreck-It Ralph
By Maggie Malone and Jennifer Lee
(Chronicle Books, $40)

The Art and Making of Hotel Transylvania
By Tracey Miller-Zarneke
(Titan Books, $34.95)

Is That All There Is?
By Joost Swarte
(Fantagraphics, $25)