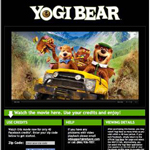 The studio’s digital distribution division made the films available Sunday for rental through the popular social networking site. The films include Harry Potter and the Sorcerer’s Stone, Harry Potter and the Chamber of Secrets, Inception, Life as We Know It and Yogi Bear. The studio had piloted the program with The Dark Knight.

To rent a film, consumers simply click on the “watch now” icon to apply their Facebook credits, and within seconds they will begin enjoying the film. This offering is presently available only to consumers in the United States.

Fans will have full control over the film while watching it through their Facebook account for up to 48 hours from purchase. They can choose to watch it in full screen, pause the movie, and resume playing it when they log back into Facebook. Consumers will also have full Facebook functionality including the ability to post comments on the movie, interact with friends and update their status.