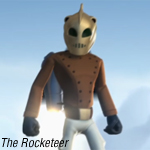 One of our favorite comics at Animation Magazine is The Rocketeer, created way back in the early 1980s by Dave Stevens and turned into a live-action feature film by Disney in 1991.

The movie version of The Rocketeer was a box office flop,  but has found new popularity in recent years. Disney recently celebrated the film’s 20th anniversary with a special panel and screening at the El Capitan Theater in Hollywood featuring cast and crew members. Unfortunately, Stevens died from complications related to leukemia in 2008 at the age of 52.

The character still inspires fans, as proven by this animated short clip from John Banana of The Rocketeer that we think Stevens would have liked.

The Rocketeer 20th anniversary from John Banana on Vimeo.

Given the increasing popularity of The Rocketeer — a new anthology comic book series was recently launched by IDW Publishing — it might be time to start petitioning Disney for a new DVD and Blu-ray release padded with bonus features.