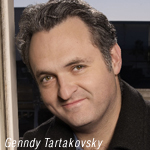 If you’ve been wondering where Genndy Tartakovsky’s been since Sym-Bionic Titan wasn’t picked up for a second season by Cartoon Network?

He’s been at Sony — where he’s created the following very cool animated prologue for the movie Priest. Check it out:

Priest will be a stereoscopic 3D live-action adaptation of the Korean manwha by Hyung Min-woo and published in the United States by Tokyopop. The movie is the first from Tokyopop, and is set to debut in theaters with Paul Bettany in the leading role on May 13.

Tartakovsky is, of course, best known for his work on the Cartoon Network series Dexter’s Laboratory, Powerpuff Girls and the original Star Wars: Clone Wars series.

Animated ‘Black Dynamite’ Coming to Adult Swim
Disney Jr. Brings ‘Guess How Much I Love You’ to U.S.