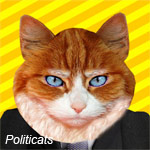 Delivering over a million hits in less than a month, SunnyBoy Entertainment’s web series, Politicats, continues to attract toon fans to SMOSH’s Shut Up! Cartoons YouTube channel. The hit animated series will premiere a debate episode between President Black Cat and Mittens 2.0 that goes live on Tuesday (Oct. 2) at 3 p.m. (EST)/ 12 p.m. (PST). It’s all leading up to the season one finale on Nov. 6th at 3pm (EST)/ 12pm (PST), which is timed to coincide with Election Day!

Politicats follows the candidates on the campaign trail, as President Black Cat battles it out against cyborg cat, Mittens 2.0 and the nefarious Fancy Feast Council. Ninja Assassin Cats, Giant Golden Buddha Cats, Mars Cats, giant cat sucking vacuums, time-traveling cat boxes, and much, much more will be put on the table, as these Politicats scratch their way to the top. New episodes air every Tuesday on Shut Up! Cartoons. The show is written and voiced by Hadjii. Kaira Akita, Anthony K Hyatt and Larrs Jackson also provide the voices of the characters.

Watch the most recent episode of Politicats at the Politicats Playlist on Shut Up! Cartoons: http://www.youtube.com/playlist?list=PLC0B1EC75C9B3A1FE&feature=plcp

SunnyBoy Entertainment is the collective efforts of Craig S. Phillips, Harold Hayes Jr. and Michael White Jr. The entertainment outfit has conceptualized ideas and scripted original content for studios and networks, including Nickelodeon and Amazon Studios, amongst others. They are currently writing R.L. Stine’s The Haunting Hour and the upcoming series Spooksville for The Hub. Additionally, their creative branding, animation and design work as been seen on Spike TV, A&E, The Discovery Channel and The History Channel, as well as in film, collaborating with such studios as DreamWorks Animation, Warner Bros., Fox, and more. For more info, visit www.sunnyboyentertainment.com. 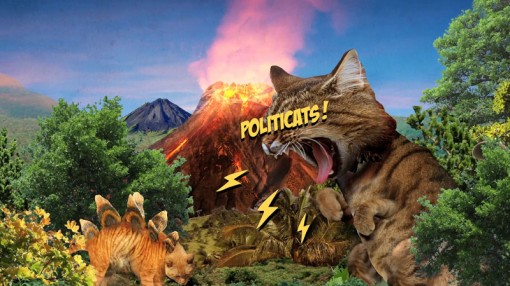