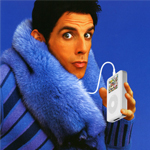 An animated spinoff of Stiller’s 2001 feature Zoolander and a tie-in social media game is one of the division’s first projects. Another online venture is Billy Glimmer: Entertainer of the Century, an original comedy about the most successful singing impressionist-comedian in Las Vegas, played by Stiller. Billy Glimmer will be written and directed by Jason Woliner, with Rob Huebel playing a Billy Glimmer “look-alike.”

Stiller called the Internet “a magical gateway to make all our dreams come true,” and also jokingly told the trade paper that Red Hour is developing a new flying jet pack and a teleportation system to travel through time. “But for now, we are concentrating on making funny videos to watch while people are pretending to work,” he said.