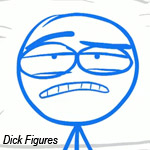 The animated Dick Figures series of about 40 shorts has recorded more than 115 million views since debuting just over a year ago on Mondo Media’s YouTube channel. It has become one of the most-viewed and highest-rated animated series on YouTube.

Written and directed by Ed Skudder and Zack Keller, Dick Figures is about two stick figure friends, Red and Blue, who make up for what they lack in smarts and sex appeal with a really long string of bad decisions. The Dick Figures audience is largely comprised of teens and young adults between the ages of 13 and 24.

“YouTube is the biggest and most powerful interactive and shareable entertainment platform available,” says Brendan Burch, CEO of Six Point Harness Studios. “Our audience has been begging for this, so it was only natural that we would reach out directly to our fans on YouTube to help us fund the growth of Dick Figures.”

Dick Figures: The Movie Kickstarter fund will remain open until 8 p.m. on July 16, with a target of $250,000 for a half hour special. If the fund raise is oversubscribed to $500,000, Six Point Harness will produce an hour-long movie, and for $700,000 the team will produce a full-length feature film. Pledges of $15 will receive a digital download of the movie and access to exclusive behind-the-scenes content and community forum. Pledges of $100 will receive a DVD, T-shirt, soundtrack, an exclusive making-of documentary, and more. For $1,000, donors will get the lower pledge level rewards plus an original portrait of the backer with Red and Blue, illustrated by Skudder.

As of this posting, the campaign had raised more than $41,000 toward its goal.

The YouTube promotional push will be supported with regular Facebook and Twitter updates on the progress of the Dick Figures: The Movie fund raise, including intimate, day by day details of the campaign.

Six Point Harness Studios and Mondo Media plan to translate the movie into German, as they have been doing on all Dick Figure’s episodes. It is a strategy that includes a worldwide fan base with 50% of the show’s audience originating from outside the U.S.