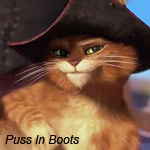 The folks at DreamWorks are going full steam ahead with their clever web spots for their upcoming feature Puss in Boots. Yesterday, we discovered a new 35-second ad about Puss, spoofing Dos Equis’ “Most Interesting Man in the World.”  The clever spot introduces Puss (Antonio Banderas) as the most interesting cat in the world, showing examples of how utterly fascinating and legendary the swashbuckling feline is. Directed by Chris Miller, the feature will be released on November 4 by Paramount.  We’ve got to say these teasers are working like catnip for toon fans around the world!

You may also like...
Related Topics:Antonio Banderas, Chris Miller, Dos Equis, DreamWorks, Most Interesting Man in the World, Paramount, Puss in Boots