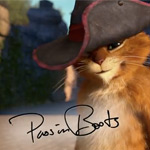 A clever video featuring everyone’s favorite heroic cat has hit the web this week. The star of DreamWorks Animation’s Puss In Boots praises the art of going pantless in public because “he is one bad kitty!” The swashbuckling cat (voiced by Shrek veteran Antonio Banderas) stars in his own adventure in the Shrek prequel, which will be out in theaters on November 4. The 3-D movie is directed by Chris Miller and also showcases the voices of Salma Hayek as Puss’s romantic interest Kitty, Zach Galifianakis as his childhood buddy Humpty Dumpty, and Billy Bob Thornton and Amy Sedaris as the villainous hillbilly duo Jack and Jill. The script is by Tom Wheeler and David H. Steinberg. Here is the new “Go Pantless” clip: