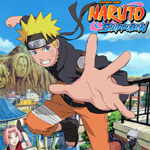 Starting today, VIZ Media will simulcast the most-recent episodes of the anime series Naruto Shippuden on the Hulu Plus subscription service.

Subscribers can watch new episodes of the series in high-definition just an hour after the broadcast debut in Japan, starting with episode 245. New episodes will be broadcast weekly.

Users of the free, ad-supported Hulu service can watch the new episodes one week after their initial run on Hulu Plus or on VIZAnime.com.

Hulu Plus subscriptions cost $7.99 per month.

Created by Masashi Kishimoto, Naruto was first introduced in Weekly Shonen Jump magazine in Japan in 1999 and quickly became that country’s most popular ninja manga targeting tweens and teens. The manga and anime series, depicting the adventures of ninja-in-training Uzumaki Naruto, is one of VIZ Media’s most successful properties and has captivated millions of fans across the Americas and Europe.