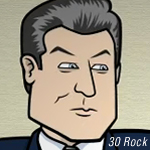 NBC’s comedy series 30 Rock airs its 100th episode tonight, and to celebrate the networks is releasing a trio of animated shorts.

The first short is up on NBC.com (and debuted on EW.com), and features the animated adventures of Jack Donaghy, Executive Superhero. The short features Alec Baldwin as Donaghy and guest stars the voice of NBC News anchor Brian Williams.

What do you think, Animag readers? Is this super, or is it sour? Let us know in the comments.