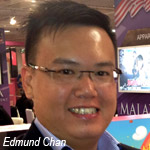 The educational preschool series will be available to subscribers on Kidobi.com later this spring.

“The deal with Kidobi is a great step forward for Malaysians penetrating the new media and online content market,” says Edmund Chan, CEO of Animasia. “IPTV is an important untapped market and it was timely that our contents now are available on Kidobi’s platform.”

In the series (22 x 22 mins.) 26 cuddly ABC Monsters live within the walls of Capital Castle. The ABC Monsters are curious and happy creatures and often wander off from Alphabet Gardens to try new and fun things, invariably getting themselves lost in the process.

The agreement  builds on several major announcements from both companies in the past weeks. ABC Monsters is the most-recent  content acquisition by Kidobi, and Animasia Studio has also recently announced that its animated sports comedy series Bola Kampung will be developed into a feature film to be released at the end of 2012.