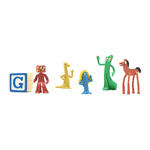 Google honored the 90th birthday of Gumby creator Art Clokey today (Wednesday, Oct. 12)  with an interactive stop-motion homepage doodle featuring well-known characters from the popular series. The doodle features a block with the letter “G” followed by five balls of colored clay for the letters in the search firm’s logo. When viewers click on the balls of clay, Gumby characters appear and pose before turning back to clay.

The doodle was animated by Clokey Productions Premavision studios, led by animator Anthony Scott (Coraline, Corpse Bride) who started his career in the 1980s on the Gumby series under Clokey. Nicole La Pointe-McKay modeled the characters for the doodle. The studio also premieres the new Gumbyworld website, which is billed as “the most comprehensive look ever at the iconic green clay boy and all of the other characters in Art’s limitless universe of imagination and artistic expression.”

“This is a perfect tribute to my father’s work,” Clokey’s son Joe, creator of the new Gumby site noted. “Art’s life and career were ahead of their time. My dad would have been thrilled to be connected with Google in this way.”

The Gumby Show premiered as an animated Saturday morning TV shows in 1956. Clokey and his wife also produced Lutheran Church’s Davey and Goliath series. Clokey died on January 8, 2010 at the age of 88 at his home in California.