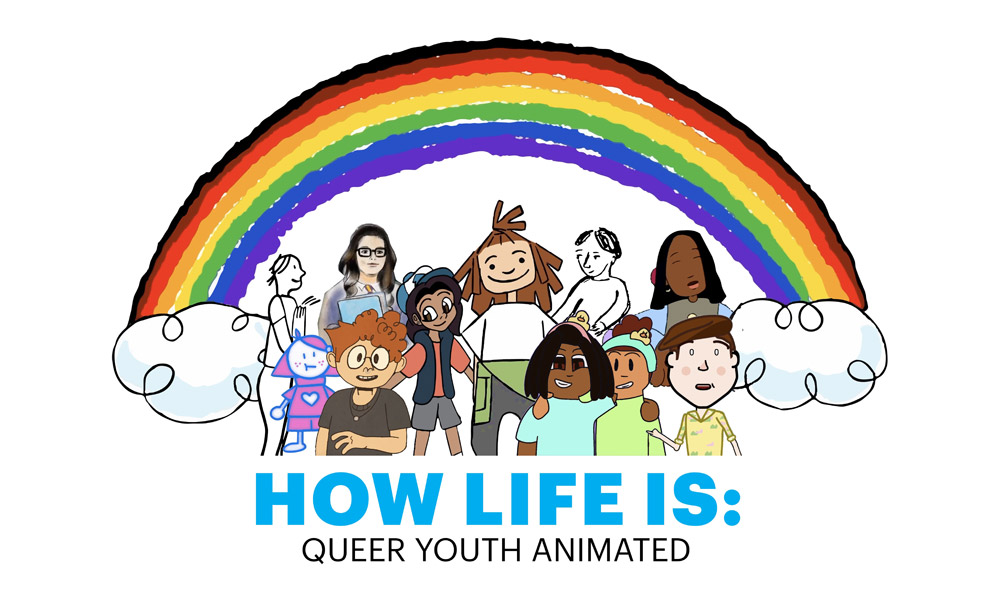 How Life Is: Queer Youth Animated

The first two episodes of How Life Is: Queer Youth Animated Season 1 will kick off on Tuesday, June 1 on The Future Perfect’s YouTube and IGTV. New episodes will be released in pairs on Tuesdays throughout the month on June 8, 15, 22 and 29.

The announcement was made by Celeste Lecesne, The Future Perfect Project co-founder, Academy Award-winning writer, and co-founder of The Trevor Project. “The current generation of queer young people has a lot to teach us about what it means to be fully human — if only we will listen,” Lecesne said. “Just as my generation fought so hard for the right to be ourselves as out gays and lesbians, this generation is fighting to be recognized and respected as the people they know themselves to be.”

How Life Is: Queer Youth Animated showcases how Generation Z is changing what it means to be LGBTQIA+. They are the first generation to live a life with the answers at their fingertips, and these two-minute films reveal that they are incredibly well informed about the world and important issues such as social justice, politics and climate crisis.

“We hand them the mic and bring their stories to life with the help of an LGBTQIA+ creative team. The result is a two-minute look into their unique lives that everyone can learn from,” said Ryan Amador, The Future Perfect Project co-founder, ASCAP Award-winning songwriter, and recording artist. “How Life Is: Queer Youth Animated spreads the word about queer youth and creates a world where they are safe, seen, and celebrated in their homes and communities.”

Matching the identity of each young person with their animator was a top priority. The Future Perfect initiated an extensive search process to find animators who aligned closely with the subjects of the interview in terms of their race, gender and sexual identity. The animators worked to find the perfect expression of each young person’s experience. After the animation was complete, it was sent off to a composer who created an original score. The result is a hyper-collaborative expression of each young person’s unique voice and an overview of this generation of queer youth. Every animator on How Life Is: Queer Youth Animated identifies as LGBTQIA+.

The Future Perfect Project produces an array of multimedia projects created to amplify the voices of LGBTQIA+ youth. In addition to their media projects, FPP offers free, grant-funded online writing, arts and performance workshops to LGBTQIA+ youth and allies providing them with opportunities to express themselves.

In a recent study, The Trevor Project revealed that more than one in five LGBTQIA+ youth in the United States identify as a sexual orientation other than gay, lesbian or bisexual. It is a whole new world in which LGBTQIA+ youth are using terms like “queer, tri-sexual, omnisexual or pansexual” to describe their identity.

The Future Perfect Project is providing this new next generation of LGBTQIA+ and questioning young people with the tools to tell us what they know, what they feel, what they see, and what they see for a future in which every person gets to be perfectly and fully themselves.