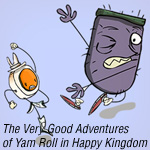 Animation fans can finally get an online taste of the Duopoly children’s series The Very Good Adventures of Yam Roll in Happy Kingdom as the show debuts on Hulu.com.

Episodes of the series are now streaming on the free, ad-supported site as well as on the Hulu Plus subscription service. The show can been seen by clicking here.

Produced by March Entertainment for Canada’s CBC and the Cartoon Network in the U.S., the series premiered in 2006 and continues to air on the CBC’s Saturday morning kids’ block as well as Australia’s ABC2 and HBO Asia, garnering a large and enthusiastic following through a combination of broadcast play, film festivals, and its dynamic fan website www.yamroll.com.

March Entertainment is an award-winning production company that specializes in comedy, animation, and multimedia. The Canadian digital entertainment group has developed and produced various hit series including Chilly Beach and Dex Hamilton: Alien Entomologist. Other recent properties include Mia and Me for RAI in Italy and ZDF in Germany, Pet Squad for the CBBC and a series of DVD movies based on the Playmobil toy franchise.

Duopoly is an independent film, television and multiplatform content company founded in 2002. Recent Duopoly productions include the Gemini Award-winning comedy series Pure Pwnage for Showcase and the original comedy web series, Papillon, starring Kevin McDonald soon to be released on BiteTV. Duopoly is a content partner for Hulu and most recently launched the award-winning animation series Odd Job Jackand Chilly Beach on the platform.