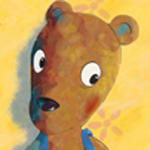 Digitally animated versions of children’s books have been one of the more popular features of Apple’s iPads since they hit the market last April. Now as industry observers await the release of iPad 2 in early 2011, we are seeing more interactive adaptations of storybooks for tablets on the market. One of the newest arrivals on the scene is Auryn’s What Does My Teddy Do All Day?, an app based on a book written by Bruno Hachler and illustrated by Birte Muller, which was created using the studio’s innovative animation process dubbed “Aurynization.”

Auryn’s proprietary stylization technology creates both 2D and CG animation that resemble the illustration of the children’s book. In What Does My Teddy Do All Day, children can enjoy the animated adventures of a little girl’s stuffed animal, in a style the closely follows Muller’s original illustration from the book. When the tablet is shaken, the bear also drops from one end of the screen to the other. As part of the experience, each page of the storybook has unique interactive experiences including a writing tablet, finger painting effect, puzzle, and touch responsive movement from Teddy and friends.

Auryn’s breakthrough animation software offers a stylized take on the traditional illustration, delivering animated depictions that resemble art created by oil paint, watercolor, pencil and crayon. According to Auryn’s founder Umesh Shukla, the software delivers a more accurate reproduction of the artists’ style than other technologies have been able to provide to date.

“We started experimenting with new visual styles about three years ago, creating animated sequences in the style of artists like Van Gogh and Monet,” says Shukla, who is based in Los Angeles. “And the response we got was that our products didn’t look plastic-y. They looked like an artist had created them with a paintbrush. We were sure that we had a tool that interested people because it left the original aesthetic of the artist intact.”

A veteran of the animation and visual effects industry who has worked a Disney Features, DreamWorks and Digital Domain, Shukla has also directed several well-received shorts Still I Rise based on the life of John Merrick (aka The Elephant Man) and The Girl Who Cried Flowers.

“The idea was to create an effective tool that would enable us to create content in partnership with other companies and artists,” says Shukla. “We are at a very interesting juncture where the arrival of new gadgets like iPads has created lots of opportunities, but it has also caused some chaos in the area of audio/video and publishing rights. We are talking to many publishing houses and we will be announcing more partnerships in the near future.

Auryn’s rendering technology addresses segmentation, stroke properties and media simulation and provides coherence—frame-to-frame flicker avoidance. The developers say it is cost efficient because the models and rigs used are simpler than those needed for photorealistic approaches and a time saver when it comes to realizing the look of traditional techniques.

Auryn is also working on an animated app based on Hans Christian Anderson’s The Little Mermaid, with illustrations by watercolorist Lisbeth Zwerger. The company is in talks with HarperCollins, Hachette, Scholastic and Simon & Schuster to develop further projects. To find out more, visit www.auryn.com.

You may also like...
Related Topics:Auryn, Birte Muller, Bruno Hachler, iPad, Umesh Shukia, What Does My Teddy Do All Day