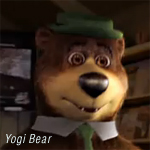 OK, so this is making the rounds online and it’s definitely an oddball piece of video. It’s a parody made by Edmund Earle in association with the producers of the Yogi Bear feature film coming out this Friday — and it’s a parody of a key scene from The Assassination of Jesse James by the Coward Robert Ford.

Fans of Yogi be warned — it doesn’t end well for him.

You may also like...
Related Topics:Boo-Boo, parody, The Assassination of Jesse James, trailers, Yogi Bear