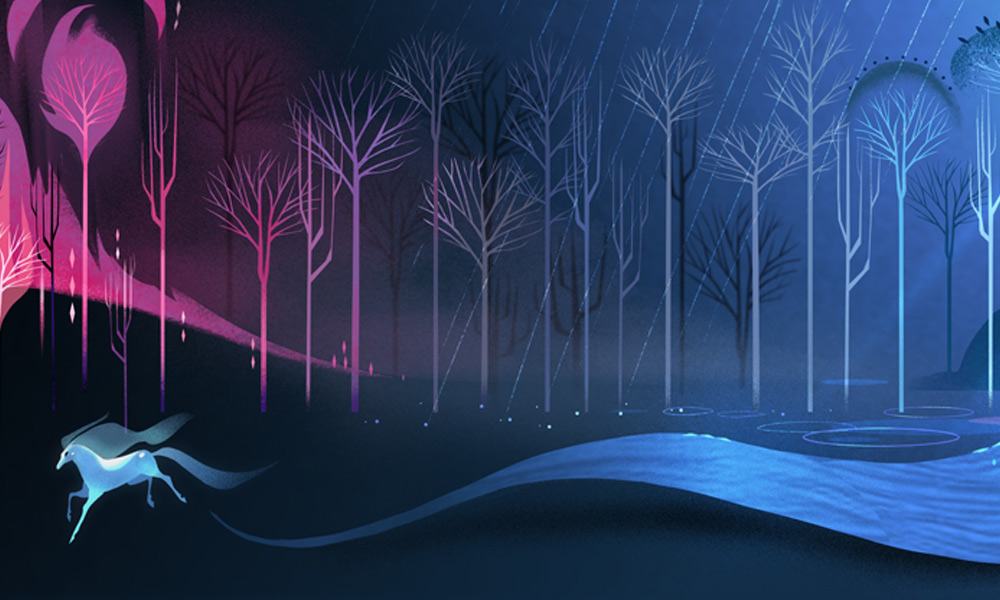 Walt Disney Animation Studios debuts its groundbreaking new VR short Myth: A Frozen Tale at the November 7 World Premiere of Frozen II at the Dolby Theatre in Hollywood. Directed by Jeff Gipson, Myth explores the movie’s world in an immersive way using the latest advances in VR technology, an original music score and stylized art direction to deliver a unique virtual and visceral experience. It is the first Disney Animation VR short inspired by one of its feature films.

“The idea for Myth: A Frozen Tale came from a personal place for me, and was inspired by my family’s tradition of telling bedtime stories. This led me to start thinking about what the world of Frozen and some of the film’s new elemental characters would look like in VR,” Gipson explained. “Myth: A Frozen Tale is set in a forest outside of Arendelle as a family sits down for a bedtime story. As the mother reads, the audience is transported to a mystical and enchanted forest where the elemental spirits come to life and the myths of their past and future is revealed. With breathtaking production design by Brittney Lee, and a brilliant musical score by Joseph Trapanese, this film follows in the Fantasia legacy of using imagery and music together in an experimental way, using the latest advances in virtual reality to achieve that.”

Clark Spencer, President of Walt Disney Animation Studios, said, “Frozen II takes place in such an incredibly rich and exciting cinematic environment, and Myth: A Frozen Tale allows viewers to explore and experience this world in a whole new way. Jeff Gipson is one of the leading pioneers in the world of VR, and he found a way to immerse viewers in this world that wouldn’t have been possible any other way. We are so excited to share this amazing VR film with audiences everywhere.”

Premiere guests will be able to view Myth: A Frozen Tale on the latest generation of the Positron Voyager Chair, which provides a cinematic VR experience showcasing Positron’s unique motion and multi-sensory capabilities which brings the audience into a deeper level of immersion and emotional connection to the story. Users sit comfortably in a VR motion chair while rotating 360 degrees horizontally, as well as 35-degrees backwards and forwards. The chairs are being provided under a special arrangement with Positron.

“We’re thrilled to see Disney Animation embracing cinematic VR as a story-telling medium, and Positron is excited to have partnered with the filmmakers of Myth: A Frozen Tale to bring a deeper level of immersion with motion and haptics in our award-winning Voyager chair,” commented Jeffrey Travis, CEO of Positron. “Audiences are going to love this film.”

The partnership between Positron and Walt Disney Animation Studios to enhance the VR film was secured by StudioLAB. StudioLAB’s strategy is to continuously innovate new ways to experience content and assist Studio creatives in pushing the limits on advance technology.

Opportunities for fans to experience Myth: A Frozen Tale will be announced at a later date.