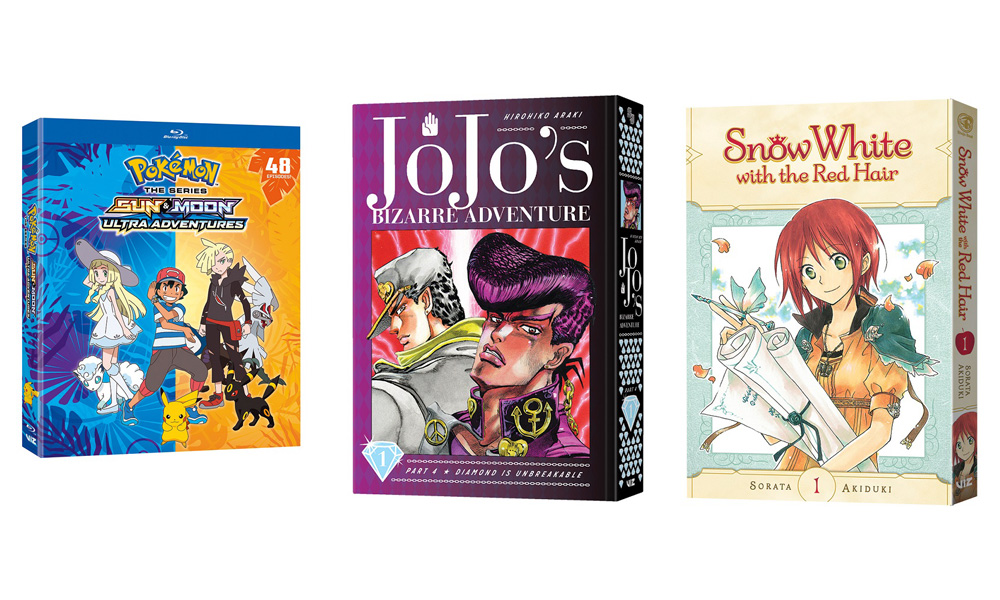 VIZ Media announces three new home media and manga titles coming up next month — plenty to keep otaku hearts in bloom through the end of spring! On disc, trainers can catch Pokémon the Series: Sun & Moon – Ultra Adventures Complete Collection, which collects all 48 episodes across six discs on Blu-ray and DVD. In print, JoJo’s Bizarre Adventure: Part 4 – Diamond Is Unbreakable delivers the latest saga of Hirohiko Araki’s award-winning, multigenerational action-adventure to readers; meanwhile, shojo fans can check out a new series with Snow White with the Red Hair.

POKÉMON THE SERIES: SUN & MOON—ULTRA ADVENTURES COMPLETE COLLECTION
Blu-ray MSRP: $49.99 U.S. / $57.99 CAN | DVD MSRP: $44.98 U.S. / $52.99 CAN
(Available May 21)
When Ash sees the Legendary Pokémon Solgaleo and Lunala in a dream, he makes a promise to them. But when he wakes up, he can’t remember what it was! Will the strange Pokémon called Nebby help jog his memory? Along with their new friend and the rest of the students at the Pokémon School, Ash and Pikachu explore the Aether Foundation, an organization dedicated to Pokémon conservation and care. But it may not be as innocent as it seems, and Ash and his friends will have to work together to protect the people and Pokémon they care about as they face a mysterious power like nothing they have ever seen.

JOJO’S BIZARRE ADVENTURE: PART 4 – DIAMOND IS UNBREAKABLE
By Hirohiko Araki
MSRP: $19.99 U.S. / $26.99 CAN · Rated ‘T+’ for Older Teens
(Available May 7)
In April 1999, Jotaro Kujo travels to a town in Japan called Morioh to find a young man named Josuke Higashikata, the secret love child of his grandfather, Joseph Joestar. Upon finding him, Jotaro is surprised to learn that Josuke also possesses a Stand. After their strange meeting, the pair team up to investigate the town’s proliferation of unusual Stands!

SNOW WHITE WITH THE RED HAIR
By Sorata Akiduki
MSRP: $9.99 U.S. / $12.99 CAN · Rated ‘T’ for Teens
(Available May 7)
Shirayuki is an herbalist famous for her naturally bright-red hair, and the prince of Tanbarun wants her all to himself! The prince from the neighboring kingdom, Zen, rescues her from her plight, and thus begins their love story. For more info on these and the many other anime and manga titles from VIZ, visit viz.com.