Adult Swim has announced that The Venture Bros. Season 6 will be released on Blu-ray and DVD on October 4, 2016. The cult hit series from creator Jackson Publick (The Tick) scored No. 1 rankings among adults and men 18-24, 18-34 and 18-49 for its timeslot when the hotly anticipated sixth season first aired earlier this year, after a 2 ½ year hiatus.

Season six sees brothers Hank and Dean relocate to the Big Apple after patriarch Dr. Venture inherits a fortune. Fabulously wealthy and settled into their luxurious new compound, the Ventures embark on all new adventures filled with drama and danger. They are joined by reinstated family bodyguard Brock (voiced by Patrick Warburton) as they face off against arch nemesis The Monarch and a host of new and returning villains with other colorful would-be heroes.

The home entertainment release contains all eight epic episodes from season six, plus the new-to-disc 2015 All This and Gargantua-2 45-minute special. Bonus material includes commentaries for every episode and deleted scenes. The Venture Bros. Season Six carries an SRP of $29.98 for Blu-ray and $24.98 for DVD.

Episodes included are: “Hostile Makeover,” “Maybe No Go,” “Faking Miracles,” “Rapacity in Blue,” “Tanks for Nuthin’,” “It Happening One Night,” “A Party for Tarzan” and “Red Means Stop.” 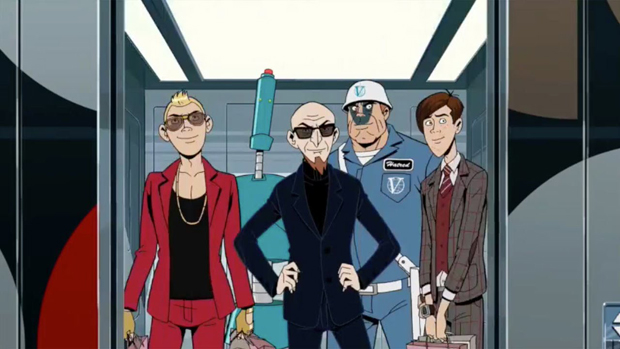 You may also like...
Related Topics:Adult Swim, All This and Gargantua-2, Jason Publick, Patrick Warburton, The Tick, The Venture Bros.