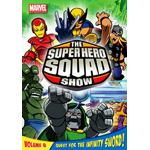 It’s a big week for animated TV series on DVD this week, with both new shows such as The Super Hero Squad Show and classics like The PJs arriving on disc.

The PJs: Season 1 (Lionsgate, $19.98), presents the first 24 episodes of the stop-motion series, which ran two seasons on Fox and one season on The WB from 1999-2001. Starring the voice of Eddie Murphy, The PJs was executive produced by stop-motion animator Will Vinton of The California Raisins fame.