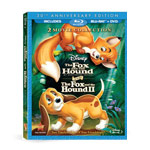 There are several interesting new animated titles coming to DVD and Blu-ray today (Tuesday, August 9). Fans of traditional Disney animation can get their paws on a new 30th anniversary of the heart-warming The Fox and The Hound, which is paired with its 2006 sequel The Fox and the Hound II. Directed by the Art Stevens, the original feature focused on the unlikely friendship between the two natural enemies and featured the voices of Mickey Rooney, Kurt Russell and jazz great Pearl Bailey. The sequel follows the adventures of the pair and their new friends, was directed by Jim Kammerud and showcases the vocals of Reba McEntire, Jim Cummings, Patrick Swayze, Stephen Root and Jeff Foxworthy. The 2-Disc pack retails for $29.99.

Disney Home Ent. is also releasing director Simon Wells’ ill-fated 3-D Mars Needs Home, which is based on the children’s book by cartoonist Berkeley Breathed (Bloom County).The early spring release only brought in $21.3 million at the box office and was considered a failure both critically and commercially. The performance capture pic features the voices of Seth Green, Joan Cusack and Dan Fogler.

Fans of 80s’ toy-based TV toons will want to check out the big 12-disc set of M.A.S.K.: The Complete Series. The series, which ran from 1885 to 1986, centered on the adventures of a group of characters with transforming vehicles known as Mobile Armored Strike Kommand, (M.A.S.K.) The Shout! Factory release retails for $99.99.

The geeky live-action pick of the pick has to be Universal’s well-received alien comedy Paul. Directed by Greg Mottola, the offbeat road movie centers on two sci-fi fans (Simon Pegg and Nick Frost) who travel from the annual Comic-Con confab in San Diego to Area 51 and encounter an R-rated, smoking-and-drinking E.T. named Paul (voiced by Seth Rogen). The DVD has an official $29.99 price tag.