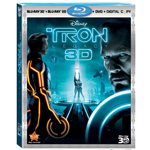 Greetings, programs! Time to fire up your DVD and Blu-ray players and get ready for the return of the classic Tron and the home video debut of the sequel, Tron: Legacy.

Fans have their choice of formats when it comes to Tron: Legacy (Disney, $29.99 DVD, $39.99 Blu-ray and DVD combo pack, $49.99 3D Blu-ray and DVD combo pack). DVD bonus features include a look at the casting, a featurette on visualizing Tron and a first look at the upcoming Tron: Uprising animated series. Bonus features on the Blu-ray releases include the new epilog to the film, The Next Day: Flynn Lives, a music video, and featurettes “Launching the Legacy,” “Disc Roars” and “Disney Second Screen – Tron: Legacy.”

There also is a five-disc set that includes the original Tron and Tron: Legacy on 3D Blu-ray and DVD for $79.99. And for old-school fans, there is the return of the original Tron (Disney, $29.99 DVD, $39.99 Blu-ray), available on DVD for the first time in years and new to Blu-ray.

Also out this week is The Chronicles of Narnia: Voyage of Dawn Treader (Fox, $29.98 DVD, $34.98 two-disc DVD, $39.99 Blu-ray and DVD combo pack). The third installment in the movie series adapting C.S. Lewis’ classic children’s books, this release features deleted scenes, audio commentary, the animated short “The Untold Adventures of the Dawn Treader” and several featurettes exploring the world and characters of Narnia.

You may also like...
Related Topics:Cat in the Hat, Chronicles of Narnia, Chuggington, Fullmetal Alchemist, Sid the Science Kid, Tom and Jerry, Tron, Tron Legacy, Voyage of the Dawn Treader, Wild Kratts