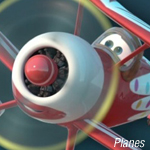 With Cars 2 now less than two weeks from arriving in theaters, the Mouse House masters have released the first look at the DisneyToon Studios feature, Planes.

Announced earlier this year, Planes is set in the same world as Cars and will be released a a full-length CG animated comedy adventure movie on Blu-ray and DVD in the spring of 2013.

Here’s how Disney described the project when it was first announced in February:

PLANES takes off with an international cast of the fastest air racers around, in a comedy packed with action and adventure starring Dusty, a small town dreamer who longs to enter the most epic around-the-world air race … despite his fear of heights. With the help and support of a fleet of new and hilarious characters, Dusty wings his way into the biggest challenge of his life.

What do you think, Animag readers? Let us know in the comments.