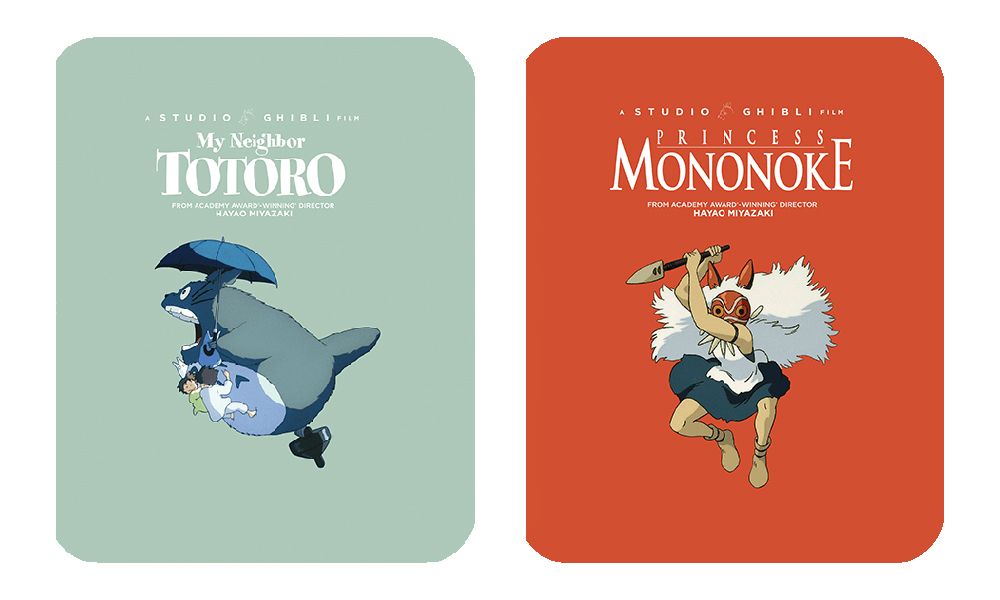 Studio Ghibli and GKIDS, with distribution by Shout! Factory, will release My Neighbor Totoro and Princess Mononoke, from the famed Studio Ghibli library of films, on October 20 in limited edition SteelBook packaging with striking new art. Each SteelBook will house a Blu-ray & DVD combo pack, presenting the film alongside hours of bonus features and a booklet with stunning art and statements from the filmmakers.

Pre-orders are now open through ShoutFactory.com for the My Neighbor Totoro and Princess Mononoke LE SteelBook sets (SRP $26.98 each).

With this release, two renowned films from one of the world’s most coveted animation collections can come home to collectors in limited edition SteelBook packaging for the first time in North America. My Neighbor Totoro and Princess Mononoke now join Howl’s Moving Castle, Ponyo, Kiki’s Delivery Service and Nausicaä of the Valley of the Wind in a series of SteelBook releases from the Studio Ghibli collection of films.

My Neighbor Totoro – From the legendary Studio Ghibli, creators of Spirited Away and Ponyo, and Academy Award-winning director Hayao Miyazaki, comes a classic tale of magic and adventure for the whole family, featuring the voices of Tim Daly, Lea Salonga and real-life sisters Dakota and Elle Fanning in one of their earliest roles.

When Satsuki and her sister Mei move with their father to a new home in the countryside, they find country life is not as simple as it seems. They soon discover that the house and nearby woods are full of strange and delightful creatures, including a gigantic but gentle forest spirit called Totoro, who can only be seen by children. Totoro and his friends introduce the girls to a series of adventures, including a ride aboard the extraordinary Cat Bus.

Princess Mononoke – From the legendary Studio Ghibli, creators of Spirited Away, and Academy Award-winning director Hayao Miyazaki, comes an epic masterpiece that has dazzled audiences worldwide with its breathtaking imagination, exhilarating battles and deep humanity.

Inflicted with a deadly curse, the young warrior Ashitaka heads west in search of a cure. There, he stumbles into a bitter conflict between Lady Eboshi, the proud people of Iron Town, and the enigmatic Princess Mononoke, a young girl raised by wolves, who will stop at nothing to prevent the humans from destroying her home and the forest spirits and animal gods who live there. Featuring the voices of Gillian Anderson, Billy Crudup, Claire Danes, Minnie Driver, Jada Pinkett Smith and Billy Bob Thornton.