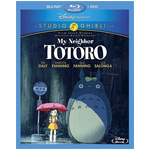 There’s lot of goodies in store for Miyazaki fans in the next couple of months. Disney will release two of Hayao Miyazaki’s most acclaimed features Howl’s Moving Castle and My Neighbor Totoro (25th Anniversary) will be released for the first on Blu-ray May 21.

The new Blu-ray Combo Pack release lets Howl’s Moving Castle soar like never before with a breathtaking new HD digital transfer of the fantastic animated adventure that celebrates the power of love and the resiliency of the human spirit in the face of adversity. Howl’s Moving Castle is the story of Sophie (voiced by Emily Mortimer), a diligent teenage girl working in her family’s hat shop, who finds her life thrown into turmoil when she is literally swept off her feet by a handsome-but-mysterious wizard named Howl (voiced by Christian Bale). Her love and support have a major impact on Howl, who can be maddeningly self-indulgent and singularly noble as he defies royal orders to participate in a meaningless war and risks his life to protect Sophie.

Disney will also release the special 25th anniversary of My Neighbor Totoro, the acclaimed Studio Ghibli film about the magic of friendship and sisterhood from Academy Award-winning director Hayao Miyazaki with the film’s Blu-ray debut on May 21, 2013.

Arriving for the first time on Disney Blu-ray with a spectacular new HD digital transfer, perfect picture and sound, the highly anticipated 25th Anniversary release of My Neighbor Totoro features the voice talents of Timothy Daly, Lea Salonga and real-life sisters Dakota Fanning and Elle Fanning. Lauded as “one of the most beloved of all family films” by critic Roger Ebert, My Neighbor Totoro is the heartwarming story of sisters Satsuki (voiced by Dakota Fanning) and Mei (voiced by Elle Fanning). Much to their delight, when Satsuki and her four-year-old sister Mei move into a new home in the countryside, they discover that their new neighbor is a mysterious forest spirit called Totoro—who can be seen only through the eyes of children. Totoro introduces them to extraordinary characters—including a catbus—and takes them on an incredible journey.

In related news, VIZ Media will celebrate the 25th anniversary of the Miyazaki classic with a special novel and picture book edition of the movie. Published under VIZ Media’s Studio Ghibli Library imprint, the My Neighbor Totoro novel will carry a price tag of $17.99 U.S./$21.00 Can., while the picture book edition will be priced at $19.99 U.S./$22.99 Can. 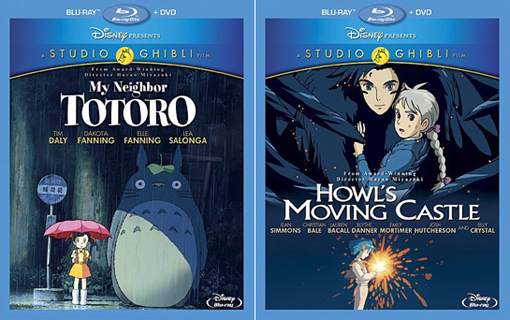