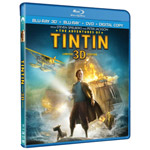 The world’s most famous boy reporter and the return of the light-footed penguins headline a strong week for animated home video releases.

Steven Spielberg directs and Peter Jackson produces The Adventures of Tintin (Paramount, $30.99 DVD, $40.99 Blu-ray and DVD combo pack, $49.99 3D Blu-ray, Blu-ray, DVD combo pack), which adapts the beloved comic-strip character to animation using mo-cap techniques. The film was a mild hit in the United States, but a huge smash in the rest of the world — so here’s a chance for those who missed it to see what all the fuss is about.

Fans of Wallace and Gromit will be certain to pick up Wallace & Gromit’s World of Invention (Lionsgate, $14.98 DVD, $14.99 Blu-ray), which collects the BBC science show starring the stop-motion duo.