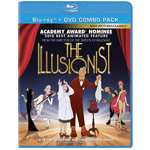 Sylvain Chomet’s highly acclaimed and Oscar-nominated 2D feature The Illusionist arrives on DVD and Blu-ray today. The beautifully drawn movie, which is based on a screenplay by French comic legend Jacques Tati, centers on the friendship between a traveling magician and a young maid he meets at a small motel during the 1960s. The Sony Pictures Classics pick-up was released in U.S. theaters last December. The 2-disc release also includes commentary by Chomet, who also wrote and directed the popular Triplets of Belleville, and a doc about how he and his team made the feature at Django Studios in Edinburgh, Scotland. (Sony, $38.96)

A very famous pooch and his crime-solving buddies are back in Scooby-Doo Mystery Incorporated: Season 1, Vol. 2, which also arrives on DVD today. The new take on the classic Hanna-Barbera toon has been quite well-received since it debut on Cartoon Network last year. Featuring the voices of Matthew Lillard, Mindy Cohn, Grey DeLisle and Frank Welker as Shaggy, Velma, Daphne and Frank, and Gary Cole, Patrick Warburton, Lewis Black and Vivica Fox in supporting roles, this fun reboot is certainly worth checking out. Vol 2 contains episodes 5, 6, 7 and 8. (Warner Bros, $14.98)

Among the other new titles up for grabs this week are: