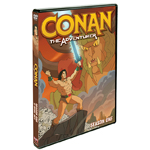 The CW’s hit series Supernatural is getting animated – Japanese style.

Hot on the heels of a showing at Comic-Con comes the release this week of Supernatural: The Anime Series (Warner Bros., $49.98 DVD, $54.97 Blu-ray). The set collects all 22 episodes of this first-ever anime series adapted from a live-action U.S.-produced television show. The animation is by Madhouse, which produced segments for the popular anthology discs Animatrix and Batman: Gotham Knight. The disc features a behind-the-scenes bonus featurette on the making of the series.

Also arriving this week for the first time in high-definition is Justice League: Season 2 (Warner Bros., $39.98 Blu-ray). The set features 26 episodes of the hit series, based on the DC Comics characters, and includes an all-new bonus featurette looking at the alternate reality concept, the use of this physical theory in the DC Comics Universe and the alternate Earth created in the episode “A Better World.”