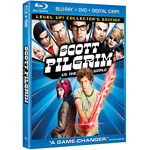 The theme this week is classics — the return of classic superheroes, a modern classic rocker toon and a complete set of the classic Scooby-Doo series that started it all.

Up first is Superman/Shazam: The Return of Black Adam (Warner Bros., $19.98 DVD, $29.99 Blu-ray), a collection of animated shorts starring various DC Comics heroes. The disc leads off with the all-new short starring the Man of Steel and the Big Red Cheese as they take on Black Adam. The disc is rounded out by extended editions of previously released shorts staring Jonah Hex, Green Arrow and The Spectre. DC fans also may be tempted to pick up Secret Origin: The Story of DC Comics (Warner Bros., $24.98), a cursory examination of the studio’s 75-year history.

Fans of death rockers Dethklok — and let’s face it, is anyone not a fan of Dethklok? — will risk life and limb to grab hold of Metalocalypse: Season Three (Warner Bros., $29.98 DVD, $39.99 Blu-ray). The set includes 10 episodes from the Adult Swim series and bonus features such as extended scenes. The Blu-ray will include as exclusives a featurette of Nathan Explosion reading from William Shakespeare’s Othello, as well as five exclusive music videos.

If you prefer your animation old-school — as in 1970s Saturday morning stuff — a true classic arrives in all its glory with the release of Scooby-Doo Where Are You? The Complete Series (Warner Bros., $79.98). Packaged in a limited-edition Mystery Machine case, the set includes all 41 episodes of the original series on eight discs.