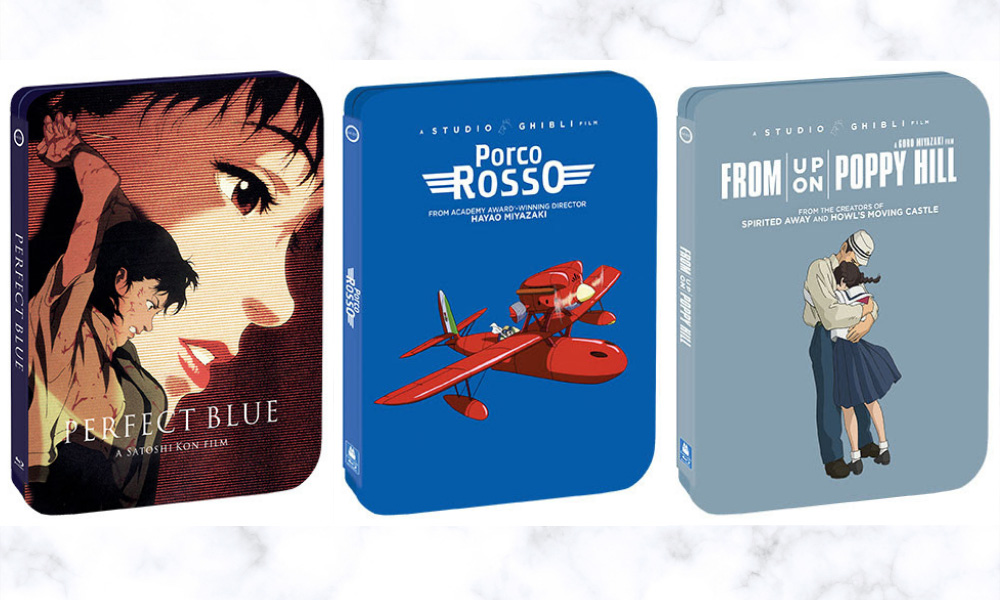 'Perfect Blue,' 'Porco Rosso', & 'From Up on Poppy Hill' SteelBooks

Shout! Factory is giving more fan-favorite anime features the SteelBook treatment at summer’s end.  In partnership with GKIDS, the upcoming enhanced releases include Perfect Blue, Porco Rosso and From Up on Poppy Hill.

Perfect Blue – September 14. Sophisticated yet unsettling, the groundbreaking psychological thriller and directorial debut of acclaimed director Satoshi Kon (Paprika, Tokyo Godfathers) has frequently been hailed as one of the most important animated films of all time. Rising pop star Mima has quit singing to pursue a career as an actress and model, but her fans aren’t ready to see her go. Encouraged by her managers, Mima takes on a recurring role on a popular TV show, when suddenly her handlers and collaborators begin turning up murdered. Harboring feelings of guilt and haunted by visions of her former self, Mima’s reality and fantasy meld into a frenzied paranoia. As her stalker closes in, in person and online, the threat he poses is more real than even Mima knows, in this iconic psychological thriller.

Porco Rosso – September 21. From the legendary Studio Ghibli and Academy Award-winning director Hayao Miyazaki (Spirited Away) comes a dazzling aerial adventure set in and above the scenic port towns of the Adriatic Sea. “Porco Rosso” is a world-weary flying ace-turned-bounty-hunter, whose face has been transformed into that of a pig by a mysterious spell. When he infuriates a band of sky pirates with his heroics, the pirates hire Curtis, a hotshot American rival, to get rid of him. But with the help of the teenage girl Fio, an aspiring airplane designer, and a sultry lounge singer named Gina, Porco takes to the skies for what may be his final high-flying showdown.

From Up on Poppy Hill – September 21. From the legendary Studio Ghibli comes another animated triumph, directed by Goro Miyazaki and based on a screenplay by Academy Award-winner Hayao Miyazaki. Yokohama, 1963: Japan is picking itself up from the devastation of World War II and preparing to host the Olympics. Against this backdrop of hope and change, a friendship begins to blossom between high school students Umi and Shun – but a buried secret from their past emerges to cast a shadow on the future and pull them apart. Featuring the voices of Gillian Anderson, Sarah Bolger, Beau Bridges, Jamie Lee Curtis, Bruce Dern, Isabelle Fuhrman, Christina Hendricks, Ron Howard, Chris Noth, Emily Osment, Aubrey Plaza, Charlie Saxton, Alex Wolff and Anton Yelchin.

Porco Rosso and From Up on Poppy Hill now join Spirited Away, Castle in the Sky, Kiki’s Delivery Service, Nausicaä of the Valley of the Wind, My Neighbor Totoro, Princess Mononoke, Howl’s Moving Castle, Ponyo, The Cat Returns, Whisper of The Heart, The Secret World of Arrietty, The Wind Rises and Earwig and the Witch in a series of Shout! Factory SteelBook releases from the Studio Ghibli collection of films.