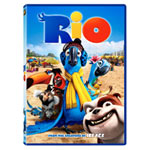 Two well-received but very different animated features make their DVD debut today (Tuesday, August 2). Fans of Rio, director Carlos Saldanha’s 3-D ode to his home country of Brazil will be able to check out this colorful, CG-animated feature, which was released last April and has made $479 million at the box-office worldwide to date. Featuring the voices of Anne Hathaway, Jesse Eisenberg, Jamie Fox, Wanda Sykes and George Lopez, the film centers on a sheltered macaw who embarks on an exciting journey to Brazil after meeting an independent bird. The movie is available as a regular DVD release ($29.99), a Party Size Double Disc edition ($34.98) and a DVD/Blu-ray/Digital combo version ($39.99). Among the numerous extras are Deleted Scenes, Rio Music Video, Rio de JAM-erio Music Video and featurettes such as Explore the World of Rio, Saving the Species: One Voice at a Time, The Making of Hot Wings, Boom-Boom Tish-Tish: The Sounds of Rio, Carnival Dance-O-Rama and The Real Rio.

The second feature is the very esoteric and 2D My Dog Tulip, directed by husband-and-wife team of Paul and Sandra Fierlinger. The strikingly animated film, which was first finished in 2009, has been a festival favorite for a couple of years. It’s based on British author J.R. Ackerley’s 16-year relationship with his eccentric German shepherd Tulip and showcases the voices of Christopher Plummer, Lynn Redgrave and Isabella Rosselini. The Fierlingers use the French software TVPaint to bring their handmade sensibility to the digital art. The DVD release features a making-of featurette, the theatrical trailer, Mutts Shelter Stories and a sneak peek at the talented filmmaker’s new project Slocum at Sea with Himself. The New Yorker DVD is priced at $29.95 and is a must for both dog lovers and animation fans.