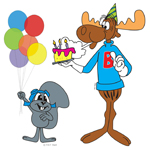 The man behind The Office and the moose and squirrel behind a generation of laughter arrive on DVD to kick off the new year.

The Ricky Gervais Show : The Complete First Season (Warner Bros., $29.98) brings the Emmy-winning animated series home for the first time. The two-disc set includes 13 episodes of the series includes as special featurs the Channel 4 Comedy Gala Animation and an Episode Story Board.

Rocky & Bullwinkle & Friends: The Complete Series (Vivendi, $99.99) box set delivers all the lunacy of the classic Jay Ward series and includes season five of the series — available for the first time anywhere on DVD in this set. Included are numerous bonus features such as an interview with animation voice-acting legend June Foray, who voiced Rocky among others on the show.