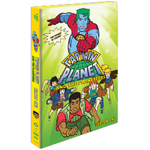 Get in line, Seth-heads — the most recent release from the Seth McFarlane-Fox animation alliance is arriving this week with the release of  American Dad, Vol. 6 (Fox, $39.98).

From the classics side of the aisle comes Captain Planet and the Planeteers: Season One (Shout! Factory, $29.93). This series was green before green was cool and aired in 1990-91. With a package made from 100 percent recycled materials, bonus features include a behind-the-scenes look at the series called Your Powers Combined: The Story Of Captain Planet and original concept art.

Here’s a quick PSA clip from the show:

You may also like...
Related Topics:American Dad, Captain Planet and the Planeteers, Fox, Gulliver's Travels, One Piece, Seth McFarlane, Shaun the Sheep, Superman