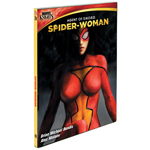 It’s going to be tough to pick from this week’s relatively even batch of animation and visual-effects DVD and Blu-ray releases.

The animated releases run the full gamut, from modern kid fare such as Hero 108: Season 1, Vol. 1 (VIZ, $14.97) to more nostalgic releases like Peanuts: Happiness Is … Snoopy’s Adventures (Warner Bros., $14.98), which pairs the TV special Snoopy’s Getting Married, Charlie Brown with an episode from The Charlie Brown and Snoopy Show on one disc.