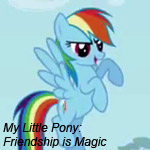 My Little Pony: Friendship is Magic is coming to DVD with the Feb. 28 release of The Friendship Express.

The disc contains five episodes and will be released by Shout! Factory in collaboration with Hasbro Studios. Bonus material includes such features as Meet the Ponies, sing-a-longs and coloring sheets. It will also include “Yipper Caper,” the very first episode of the new Pound Puppies series.

My Little Pony: Friendship is Magic debuted in 2010 on The Hub and is currently airing its second season with a third on order.

In My Little Pony: Friendship is Magic — The Friendship Express, the benevolent Princess Celestia, ruler of Equestria, selects unicorn Twilight Sparkle for a very important assignment — to learn about the most important magic of all: friendship. With her new friends, Applejack, Rarity, Fluttershy, Rainbow Dash and Pinkie Pie, Twilight sets out on amazing adventures, and they all learn what it means to be true friends.

The DVD carries a suggested retail price of $14.97.

You may also like...
Related Topics:DVD, Hasbro Studios, My Little Pony: Friendship is Magic, Shout Factory, The Hub