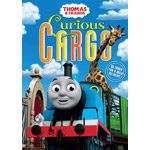 There’s no week that can’t be brightened up with a DVD release from the Usual Gang of Idiots.

Leading this week’s home entertainment releases is MAD: Season 1, Part 2 (Warner Bros., $19.97). This collects the second half of the hit Cartoon Network series based on the famous humor magazine. Among the gems featured in the many sketches is “The Buzz Identity,” in which Toy Story’s Buzz Lightyear stars in a spoof of The Bourne Identity, and Twigh School Musical, a mashup of Twilight and High School Musical.

Also out this week is Thomas & Friends: Curious Cargo (HIT Entertainment, $14.98), which features four episodes of the classic children’s series, with a handful of bonus games as well.