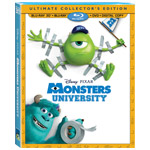 The folks at Disney Home Ent. have prepared the perfect Halloween DVD/Blu-ray for animation fans. This past summer’s blockbuster hit Monsters University arrives on Tuesday (Oct. 29) on DVD, Blu-ray and Blu-ray 3D. Directed by Pixar veteran Dan Scanlon, the movie has made over $267.8 million in the U.S. and $742.9 million worldwide since its release in June. The prequel features the voice talents of Billy Crystal, John Goodman, Steve Buscemi, Dave Foley, Julia Sweeney, Joel Murray and Peter Sohn.

Campus Life. What’s it like being on a production crew at Pixar? Get a look at a day in the life of the Monsters University crew through their own eyes.

Story School. This documentary examines the challenges of creating a prequel as well as themes that run through the story, and the change in focus from Sulley to Mike. We’ll also look at how gags are developed – from writing jokes to brainstorming a million ideas, only 5% of which actually end up in the movie.

Scare Games. A look at Pixar’s producers, managers, coordinators and artists and how they bring spirit and excitement to some of the studio’s extracurricular activities.

Welcome to MU. Sets aren’t just buildings, they are the worlds our characters live in and explore. This look at the Monsters University campus and its development is told from the perspective of the artists who created each piece of the campus from the architecture to the ivy leaves.

Music Appreciation. Randy Newman’s scores are a mainstay of Pixar films, and this documentary will give you a privileged look at his creative process. We follow the scoring process from spotting to writing and on to the scoring session.

Scare Tactics. Animators are actors who digitally bring the characters to life. In this look at how the MU animation team worked, you’ll see their process of how they channeled their own monster-selves and created moments on screen that were really funny, really scary and also really serious, sometimes all at the same time.

Color and Light. How can a single painting set the tone for an entire scene? We’ll look at the creation of the colorscripts and how they were realized technically in the final film. Along with the process, this piece explores the many layers of technical innovation required to produce such a naturalistic feel.

Paths to Pixar, MU Edition. When one door closes, sometimes another door opens – one with an even more exciting opportunity behind it. Members of the MU crew tell their own compelling backstories and share the challenges they overcame along their paths to Pixar.

Furry Monsters: A Technical Retrospective. Explore the difficulties in creating characters that are 20 years younger with tools that are 10 years more advanced in this contrasting look at the differing technical challenges that arose when making Monsters, Inc., and Monsters University.

The Blue Umbrella. This animated short film from Pixar Animation Studios, directed by Saschka Unseld and produced by Marc Greenberg, played in theaters in front of the feature. The award-winning short tells the story of an evening commute in which the rain starts to fall and the city comes alive to the sound of dripping rain pipes, whistling awnings and gurgling gutters. And in the midst, two umbrellas—one blue, one not—fall eternally in love. 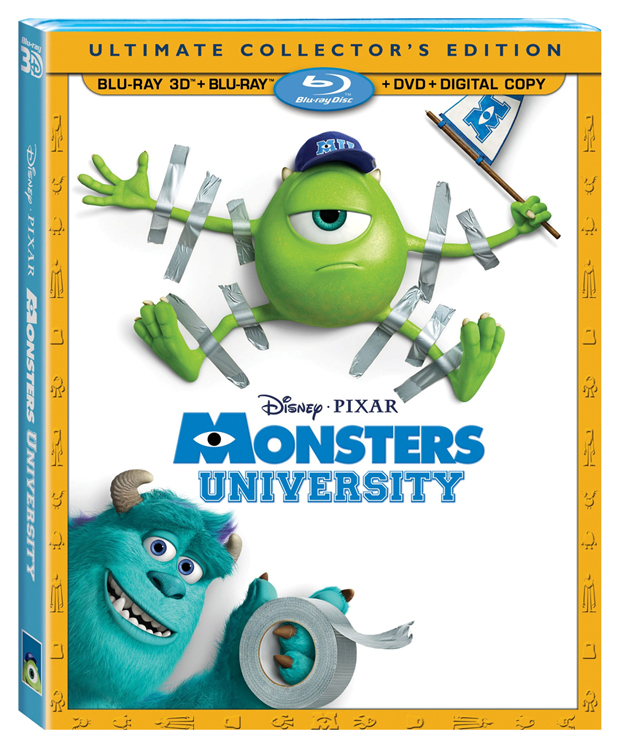