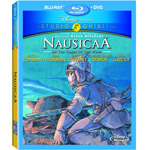 It’s a huge video week for fans of Hayao Miyazaki and Studio Ghibli (and who isn’t a fan?).

This week sees the release of the film regarded by many as Miyazaki’s masterpiece: Nausicaa of the Valley of the Wind (Disney, $29.99 DVD, $39.99 Blu-ray). Originally released in Japan in 1984, this is the first high-definition release and features the 2005 English language re-dub, featuring the voices of Uma Thurman, Shia LeBeouf and Patrick Stewart.

Based on Miyazaki’s manga series, which he spent 12 years starting in 1982 creating, Nausicaa is the story of a post-apocalyptic princess fighting for peace in the far-flung future. This release includes bonus features “Behind the Microphone,” “The Birth Story of Studio Ghibli” and original TV trailers. The Blu-ray release includes exclusive features under the banner “World of Ghibli,” including “Behind the Studio,” “Enter the Lands,” “Studio Ghibli Trivia Challenge” and original Japanese storyboards.

With Easter coming up, a pair of faith-based releases arrive featuring the VeggieTales. Up first is VeggieTales: Twas The Night Before Easter (Vivendi, $14.97). This release includes audio commentary, and bonus features such as “The Hopperena” Silly Songs Sing-Along, behind the voice of “Cassie” with Melinda Doolittle, Larry’s backstage pass to “VeggieTales Live!” and “Easter Cards” Interactive Matching Game.

That release is book-ended by the release  of Jonah: A VeggieTales Movie (Vivendi, $19.98 Blu-ray/DVD combo pack).

Other kid-friendly releases this week include SpongeBob SquarePants: The Great Patty Caper (Paramount, $16.98), The Backyardigans: We Arrrr Pirates! (Paramount, $16.99), Care Bears Classic Collection (Lionsgate, $9.98) and Madeline on the Town (Vivendi, $12.99).

And the best visual-effect release of the week is The Walking Dead: The Complete First Season (Anchor Bay, $39.98 DVD, $49.99 Blu-ray), collecting the hit AMC series based on Robert Kirkman’s Image Comics series.