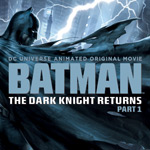 Warner Bros. Animation offers another epic chapter in the history of the Dark Knight, based on Frank Miller’s acclaimed comic.

Few graphic novels have had the staying power of Batman: The Dark Knight Returns. Released in 1986, the DC Comics epic written and drawn by Frank Miller was an instant sales hit and part of a key wave of work that, along with Watchmen and Love & Rockets, proved that comics were not just for kids.

Having influenced every new take on Batman from Tim Burton’s films and the classic Bruce Timm animated series through Christopher Nolan’s blockbuster trilogy, Warner Bros. Animation is finally adapting to animation the original tale of a retired Bruce Wayne driven to put on the mask to once again save Gotham City.

Originally published as a four-part series of slick graphic novels, The Dark Knight Returns is pushing the boundaries again in animation as it becomes the first DC Universe home-video feature to span two releases. Batman: The Dark Knight Returns, Part 1, out Sept. 25 on Blu-ray, DVD and digital download, adapts the first two volumes, with the conclusion due out next year. 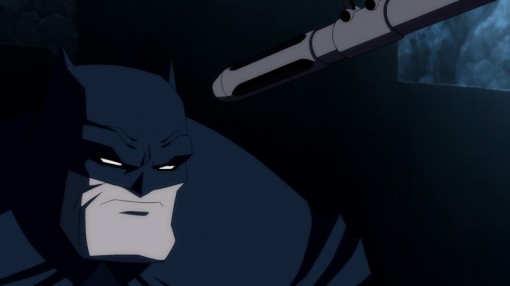 Director Jay Oliva, a veteran storyboard artist and director for many of DC and Marvel projects, says he was thrilled to adapt a classic tale that had a big impact on him when he first read it at the age of 11.

“My idea for it was that I would make it so that if they ever tried to do a live-action version of it they would have a really hard time topping what I would do in this film,” says Oliva. “I wanted to make it feel close to the source material but then add to it, and still have it be in that same vein of the Frank Miller storytelling and the feel of the graphic novel.”

In addition to raiding his library to revisit the original tale, Oliva says he went back to a 1998 episode of Batman: The Animated Series called “Legends of the Dark Knight” that featured a short segment adapting the look and tone of Miller’s original. Oliva says the segment conveyed the feel of Miller’s art — which evolved over the course of the original book — but with the sensibilities of producer Bruce Timm, giving him a starting point for the visuals on the movie version. 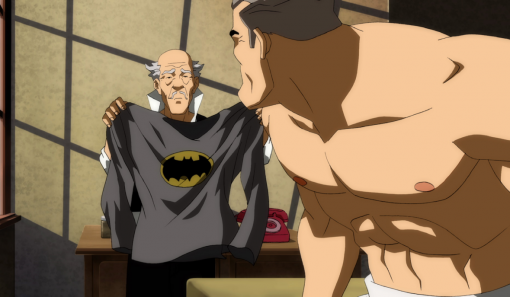 “We wanted to make it so that when you watched the film it felt like you’re seeing Frank Miller’s drawings come to life,” he explains. “But if you really were to open up the comic book and look at it from panel to panel, you’d know we used some of the same setups, but we didn’t draw exactly the way Frank did.”

That well-known TV episode was written by another superhero animation veteran, Bob Goodman, who wrote the screenplay for both parts of the adaptation.

“I had always said that this was the one property on the top of that list that I would move mountains to get to write the adaptation for,” Goodman says. “I was thrilled and honored and, yeah, there’s also a burden and a responsibility to get it right.” 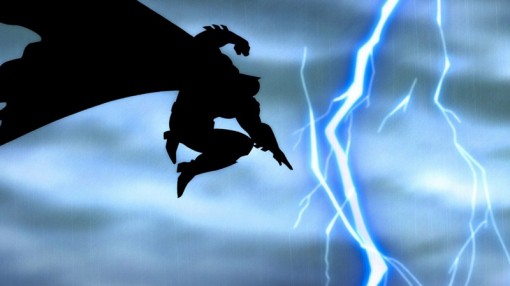 Goodman says that if he does his job right, his efforts will be invisible and viewers will see only the original Miller story. In addition to changing the structure and trimming dialog and subplots, Goodman says he successfully pitched the idea of removing the voiceover from the comic.

“My goal was to adapt this to a movie, which to me meant dramatize these scenes so that the dialog is external, so the action conveys the ideas and, hopefully, remain so true to what was in the voiceover that no one’s going to watch this and feel like it’s just not the same without it,” Goodman says.

One example of necessary changes is the opening sequence, in which Bruce Wayne pushes a racecar beyond its limits to a fiery crash. The comic used small, close-up panels of Wayne’s face and extensive voice over captions; the animated version offers a clearer take inspired by Oliva’s love of classic race movies such as Grand Prix. 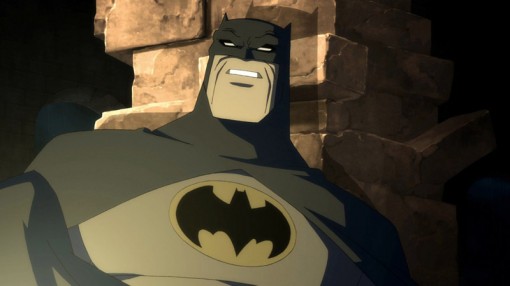 Some sequences are more personal than others. Oliva originally was hired as a storyboard artist on the project before he was tapped to direct it, and found he just couldn’t give up to anyone else the junkyard fight between Batman and the Mutant Leader or their final confrontation in a mud pit.

“I said I don’t know anybody that I can give this to that would do it the way that I see it in my head,” he says.

Casting for the movie featured some unexpected surprises. Nabbing Peter Weller to play the lead role of Batman and Bruce Wayne was a particular coup, Oliva says, given that Robocop — one of Weller’s signature roles — is heavily influenced by The Dark Knight Returns. Ariel Winter of ABC’s hit comedy Modern Family steps into the sidekick role as the voice of Carrie Kelley, the new Robin; while David Selby fills the key role of Jim Gordon; Wade Williams plays Two-Face; and Michael McKean voices the soft-on-crime psychologist Dr. Bartholomew Wolper. 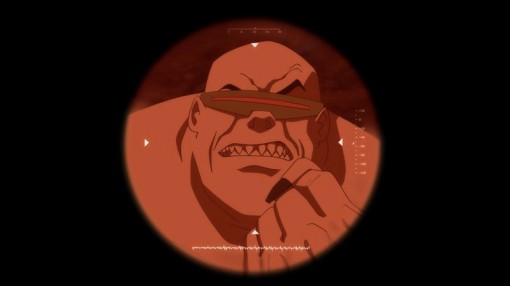 But some of the best ideas came from unusual sources. When discussing with casting director Andrea Romano and Timm who would voice Bruce Wayne’s parents in a flashback scene, Oliva had an unexpected comeback.

“I said (to Andrea), ‘Well, I wouldn’t mid if you and Bruce did it,” he said. “I thought it would be kind of fitting. They had such a huge impact on Batman.”

Romano backed out, saying she didn’t sound like the younger woman in the visual, but Timm did voice the role’s single line. 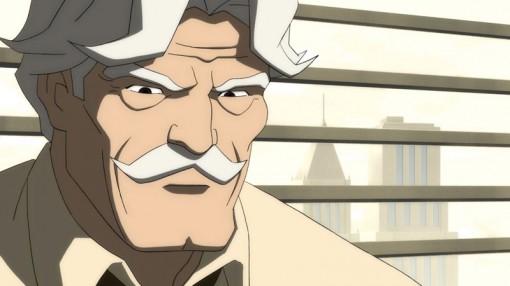 One of the keys to maintaining the look of the original comic is the color palette artist Lynn Varley applied to Miller’s art. The muted, watercolor style was unique and groundbreaking in 1986, but posed a different challenge for Oliva, who is color blind.

“I give all the credit to my color stylist, Bill Dunn,” says Oliva. “A lot of times, Bruce (Timm) would be looking over Bill’s shoulder and say, ‘Hey, can you drop the saturation down here?’ or ‘Can you adjust this color a little bit more?’ And Bill will make the changes and Bruce will be like: ‘That looks good. Jay, what do you think?” And in my eye I don’t even see a difference!”

Animation work was done at MOI Animation in Korea, prompting Oliva to travel to Asia to present the project and its importance to fans and the Batman mythology in person. 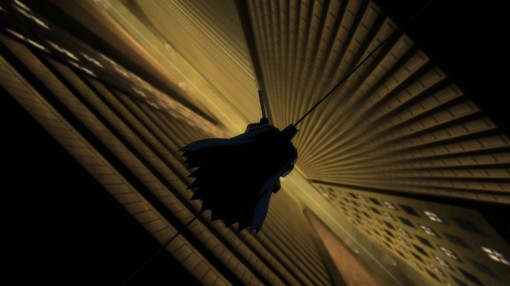 “I had to make them understand I wanted it to feel more like a movie and not just like a cartoon. They really responded to that.”

The 1980s feel of the original extended into a new area for the animated feature — music. Oliva says composer Christopher Drake picked up on the idea of imitating the way the movie Drive used older music and created a new sound that incorporated 1980s-style synthesizers.

Fans of the book know what to expect in Part 2, when it hits next year, including showdowns between Batman and two of his biggest foils: The Joker and Superman. Fans are already excited at seeing the new version of the Joker, voiced in his brief appearance in Part 1 and in Part 2 by Michael Emerson from Lost. 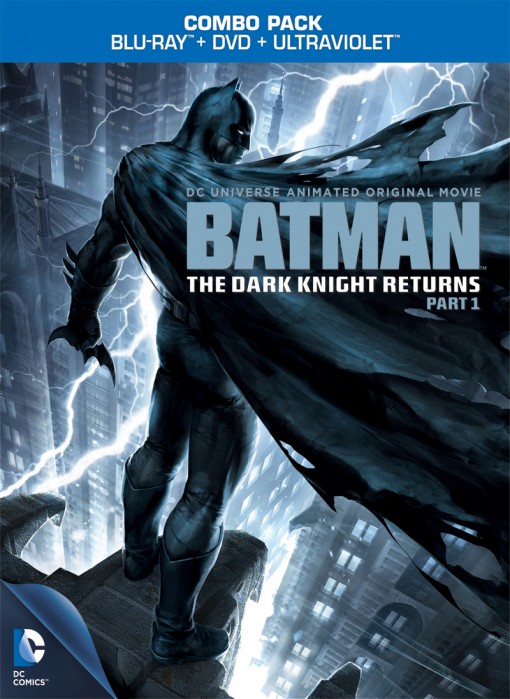 Oliva says Part 2 has been delivered, and he considers it among his best work to date.

“I think when you watch both films back to back, you’ll really love Part 1 because it’s a smaller story, but then you see Part 2 and everything that was happening in Part 1 culminates in Part 2, and it’s ten times huger. It’s quite amazing.”

Warner Bros’ Animation’s Batman: The Dark Knight Returns Part 1 is available for DVD, Blu-ray and Digital Download. Part 2 will be out in early 2013.