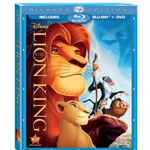 With Father’s Day this weekend, Disney has lent the characters and footage from The Lion King to a public-service announcement for fatherhood.gov, the National Responsible Fatherhood Clearinghouse.

The Lion King is getting converted to stereoscopic 3D and will return to theaters Sept. 16 for a limited theatrical run, followed by the Diamond Edition release Oct. 4 on Blu-ray and Blu-ray 3D.

And a happy Father’s Day to all out Animag readers!