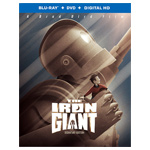 Brad Bird’s iconic animated feature The Iron Giant will be back on the home entertainment market this fall, and better than ever. Available September 6 from Warner Bros. Home Entertainment, The Iron Giant: Signature Edition will mark the film’s debut on Blu-ray, and the fully remastered 1999 film (enhanced with two all-new scenes) will also be available as an Ultimate Collectors Edition the same day.

“We’re tremendously gratified by the ever-growing status of The Iron Giant, which was a labor of love for those of us who made it,” said director Brad Bird. “It seems like a perfect time to give the film’s large and expanding fan-base the deluxe Blu-ray they’ve long been asking for.”

Winner of nine Annie Awards, The Iron Giant is the tale of an unlikely friendship between a rebellious boy named Hogarth (voiced by Eli Marienthal) and a giant robot, voiced by a then little-known actor named Vin Diesel. The voice cast also included Jennifer Aniston and Harry Connick Jr. The film was produced by Allison Abbate and Des McAnuff from a screen story by Brad Bird and screenplay written by Tim McCanlies and Brad Bird, adapted from poet Ted Hughes’ book, The Iron Man.

Priced at $14.97, The Iron Giant: Signature Edition on Blu-ray contains both the Signature Edition and original theatrical versions of the film in high definition, as well as the new, definitive making-of documentary, The Giant’s Dream. And for fans with deeper pockets, the Ultimate Collectors Edition (SRP $74.99) has both film versions in HD and SD. documentary, a hardcover art book of the film, collectible Mondo art cards, a four-inch articulated Iron Giant statue, and a letter from Bird. 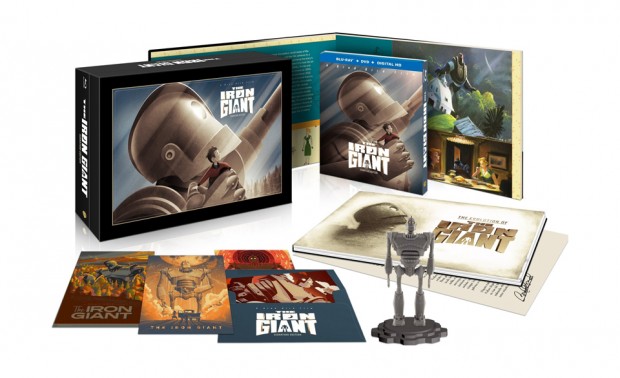